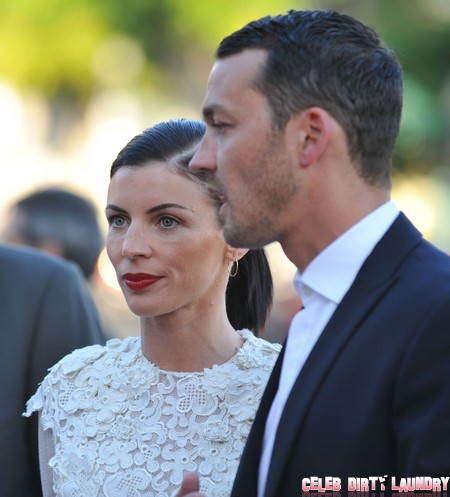 Today we learned that while Liberty Ross might be good looking she is not too clever.  It seems the wife of Rupert Sanders and mother of his two children is working to reconcile with the snake.  In fact Liberty seems to be prepared to get over Rupert’s affair with Kristen Stewart as long as he can! Liberty is working with the unsound theory that her life can be made whole again as long as she understands why Rupert cheated and he can assure her that he won’t stray again.

First of all, Liberty already schlepped Rupert to a marriage and family therapist on Tuesday.  She wants to understand what went wrong in their marriage that drove her husband to devour Kristen in a torrid affair.  This is so sad – Liberty is doing what so many people do who are married to snakes – they blame themselves at some level for the bad behavior of their partner.  Yes Liberty, it was your fault that Rupert seduced the most famous sexy young actress in Hollywood…

Liberty has also been to see a divorce lawyer but not to initiate a final separation from her rotten husband!  Poor Liberty wants to bind Rupert to some sort of non-cheating contract.  Hey, wait a minute, wasn’t their initial marriage contract supposed to do that?  It seems Liberty wants to set up certain clauses in a legal agreement with Rupert that penalize him should he stray again.  Way to go Liberty, you’ll get that happy life now with a man who fears cheating not because he loves you but because he has signed a special contract.

TMZ exclusively reports: Liberty Ross — the wife of director Rupert Sanders who cheated on her with Kristen Stewart — has already seen a divorce lawyer … TMZ has learned … but her goal is reconciliation.

Sources connected with the couple tell TMZ … although Liberty has lawyered up, her end game is NOT divorce. In fact, Liberty and Rupert have already been to a marriage and family therapist. Our sources say, when they were photographed together on Tuesday in Beverly Hills (above), they were coming out of an office building where they met with the psychologist.

Although Liberty is not wearing her wedding ring, we’re told her goal is figuring out why Rupert cheated and getting some sort of assurance he views what he did as a terrible mistake that he won’t repeat.

Rupert lusts after women as long as they are not his wife.  Rupert is a Hollywood director – a man of power who works with some of the most beautiful women in the world.  If Liberty thinks that contracts and therapy are going give her a devoted and loyal husband she is mistaken.  I think Rupert wants Kristen Stewart as much as Robert Pattinson can’t stand the trampire.  What do you think?