Lindsay Lohan Arrested For Punching A Woman In A Nightclub 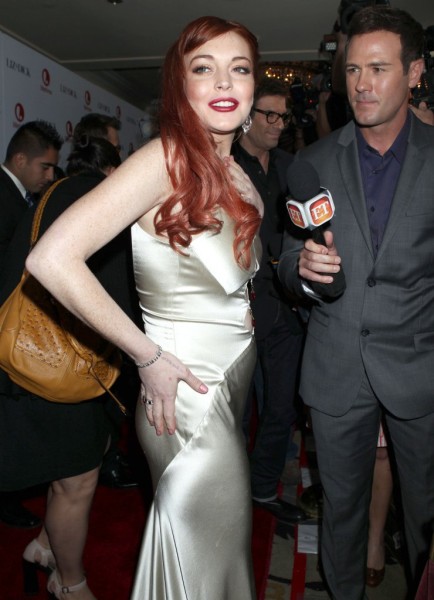 Because a nightclub is exactly where Lindsay Lohan should be at 4 a.m. But when has Lindsay Lohan ever made a good decision (past Mean Girls) or listened to reason?

It all went down at Club Avenue last night in NYC. According to TMZ, Lindsay got into some sort of stupid and mindless argument with a chick at a fellow booth and couldn’t handle her shit and ended up smacking her down.

Law enforcement tells us prior to the fight words were exchanged between Lindsay and the woman as they sat in separate booths near each other. Lindsay said something to the effect of, “Give me my space.” Some time passed and then, for some reason, Lindsay allegedly punched the girl in the left side of her face.

We’re told by the time cops arrived Lindsay had left the club and was a passenger in a car that was leaving the area. Cops intercepted the car and made the arrest.

The train wreck is currently getting booked for a third degree misdemeanor and said to be getting released with a “desk appearance ticket” meaning more judge time. This can’t be good. She’s already in deep shit over lying to the cops about her June car accident. She said she wasn’t driving when it naturally turned out she was.

Do we have to go back to second grade? When is hitting someone ever appropriate? When does it cross your mind to hit someone? I just don’t understand that whole thing. The chick was probably ripping on Liz and Dick which is totally warranted. Let’s just face the facts. Lindsay’s going back to jail and she might just stay there. I’m beginning to lose faith in our judicial system. How many times does a dumb ass have to blow their probation before they go to jail for longer than three days? Teen Mom Amber Portwood has down more time behind bars than Lindsay! Something’s not right there.

Are you surprised by the Lindsay Lohan arrested news? Is it bad when we’re no longer surprised?