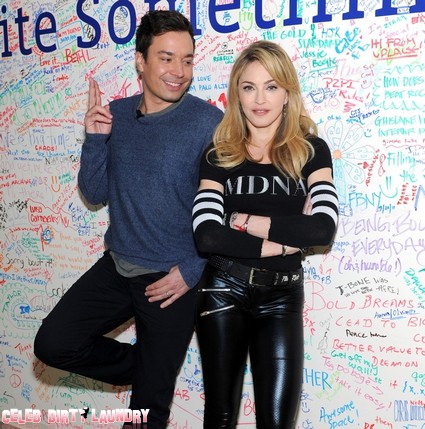 Madonna has worked with just about everyone. Now she has her sights set on uber cool movie director Quentin Tarantino. She revealed during her live Facebook chat with Jimmy Fallon this weekend that he would be perfect to direct one of her upcoming music videos from MDNA.

The Material Girl says one of the tracks on the new CD called Gang Bang was actually inspired by Tarantino’s work and she’d love to be his leading lady. Madge admitted she even had a concept ready to go ‘I have a whole thing worked out in a motel room. All he has to do is show up with a camera.’ I like the idea!

During Madonna’s 25 minute live chat she took questions from fans around the world. Most wanted to know about the World Tour that kicks off in May. The singer did give a couple of things away. The show will run just under two hours and be divided up into different sections. She’ll perform old and new tracks and we may get a few surprises from early on in her career. She says ‘the first section I titled ‘Transgression,’ so use your imagination.’ She also admitted there’ll be a bit of violence in the opening segment hence the bruises while she’s been rehearsing. For the tour dates check out Madonna Announces Her Biggest Ever World Tour

Madonna also revealed what she’d do if she was in the White House for a day ‘Well, when I am the president I will first of all take all the money spent on defense and put it into education, so that schoolteachers get paid more money. It’s scandalous how low their pay is. Gay marriage would be legal everywhere and accepted. There would be no restrictions whatsoever on any of my videos, ever.’