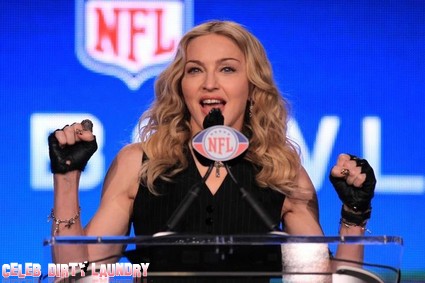 Have you heard the joke about Sunday’s Super Bowl? Apparently there’s going to be a football match either side of Madonna‘s half time performance. Boom boom. Well the Material Girl is doing everything she possibly can to gatecrash the holy grail of American sporting events. Now it’s being reported her 2012 World Tour will be announced after her 12 minute appearance.

Madge knows arch rival Lady Gaga is planning a world tour as well so she wants to make her announcement first. There’s a lot of competition between the Queen of Pop and her wannabe successor. Madonna reckons if she can get the jump on ticket sales she’ll foil Gaga’s plans to stage the biggest concert tour ever. All is fair in love and world domination.

You’d be forgiven for thinking Gaga had been swallowed by her giant egg in the last couple of weeks. Madonna’s promotional blitz has managed to knock the singer off the radar. Not an easy task. Gaga may have become a household name over the last two years but Lady Madonna made sure she got the coveted Super Bowl gig. When Gaga expressed interest in the slot Madge went all out to make sure she was the star attraction.

She’s also giving Gaga a run for her money in the record books. Madonna’s Give Me All Your Luvin’ music video has had more than 2.5 million views online in less than 24 hours. While the new album MDNA has gone number one on iTunes in 53 countries on pre sales alone. It isn’t out until late March. I guess you could say the 53 year old has still got it!