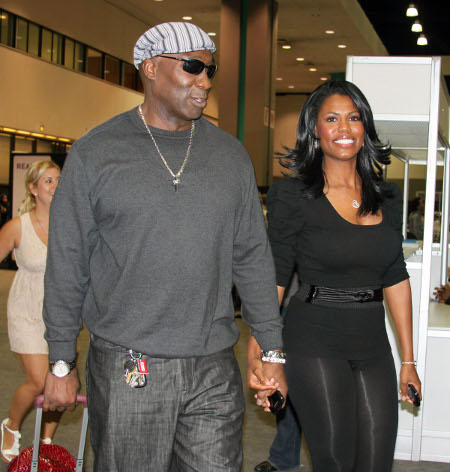 As we reported earlier, Michael Clarke Duncan passed away. The actor, who is perhaps most famous for his role in The Green Mile, leaves behind a loving family and plenty of Hollywood friends, including girlfriend Omarosa Manigault-Stallworth who is most famous for her role on Donald Trump’s reality show The Apprentice. While Omarosa hasn’t opened up in an extremely public manner about Michael’s death, his passing will undoubtedly impact her greatly.

A rep for Omarosa says that she “is grateful for all of your prayers and asks for privacy at this time. Celebrations of his life, both private and public, will be announced at a later date.”

Omarosa and Michael were clearly in love and they were engaged to be married at an undisclosed time. In a previous interview with Access Hollywood, Michael chats about how the two first met and how he thought he might have ruined his shot at a date with the fierce Apprentice star. He then goes on to describe how he recovered from his little romantic fumble and, ultimately, found the love of his life. “I saw her on this talk show,” he said, “and she had these legs–that is one gorgeous woman. I just had to meet her!” Apparently, a little leg compliment is all one needs to smooth things over.

TMZ reported earlier that Omarosa’s mother and Omarosa were in the hospital during the time he died. Omarosa reportedly left for a very brief moment and, upon returning, discovered that he had died. The news of his death was a shock to all of Hollywood, and we’re positive his passing has left Omarosa in a state of shock. “I am devastated,” the former Apprentice star-turned-magazine editor tells Radar Online exclusively. “He was the love of my life.”