Mila Kunis Calls Her Lifestyle “Mediocre” — Does She Want A Family With Ashton Kutcher? 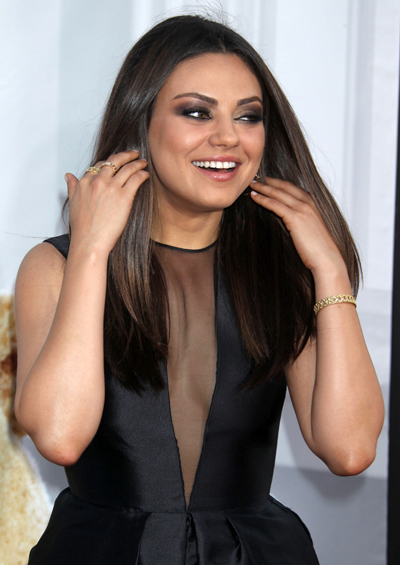 Is Mila Kunis burned out on Hollywood? Considering her most recent movie role was opposite an animated teddy bear in Ted, we guess we can’t be shocked that the 28-year-old actress sounded a bit pessimistic about her career longevity in the latest issue of Interview Magazine.

“This industry can eat you alive. I think it feeds you a lot of bullsh-t and then spits you right back out, and then you get caught up in it because so much of it is perception and opinion. The fact that there is no right or wrong is what I think is maddening,” she said, reports US Weekly. “I think that you have to restrain yourself from Googling your name and have other hobbies and desires and wants.“

Calling her lifestyle “mediocre,” Mila went on to explained that her TV successes have allowed her to be choosier about her movie roles:

“After doing [That ’70s Show] for eight years and [Family Guy] for more than a decade, you are, financially speaking, in a very lucky position where you don’t have to work for the sake of working. And I decided to take advantage of that. I don’t live lavishly, so it’s not like I have 20 assistants and travel privately and shop every day.“

And while Mila did mention her new boyfriend Ashton Kutcher by name, she did reveal that she hopes to have a family in the next five years:

“Listen, in five years I do hope to have a family, and, you know, who knows? I think in this industry people have such a short shelf life, truly, that I don’t know what I’m going to be in five years in regards to acting. I mean, I’d love to produce. I can’t form a sentence or write an e-mail, so I know I’m definitely not going to go and become a writer, but I would love to explore other facets of this industry, for sure…I’ve always been a big proponent of not working for the sake of working, because I don’t want to work for the rest of my life — I want to live. So I’d rather work to live than live to work.”

You know who has a successful production company? Mila’s new boyfriend, Ashton Kutcher. Perhaps, Mila wouldn’t mind being Ashton’s partner in more ways than one. But would Ashton really be ready to get married again, after such a messy split from Demi Moore? Related: Demi Moore Says Ashton Kutcher Was Cheating With Mila Kunis During Their Marriage