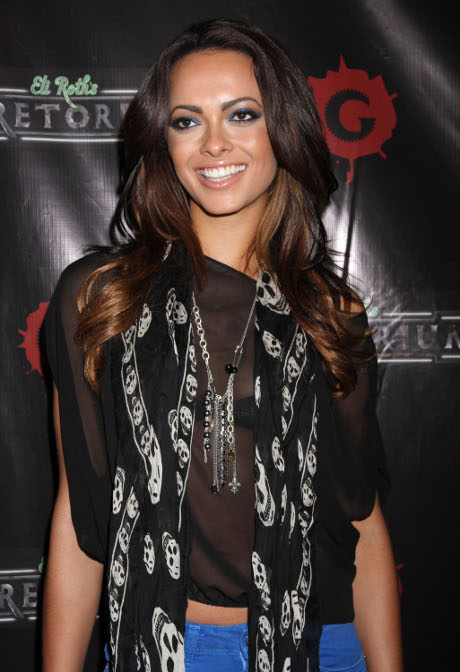 According to the Las Vegas Review Journal, the original publisher of the story, neither Kelsall or the director of the Miss Nevada USA organization could be reached; however, according to Kelsall’s Twitter feed, it seems as if she was in L.A. filming an episode of Gordon Ramsay’s MasterChef Season 4.

Miss USA contestants are no stranger to predicaments of this nature, and many of them have had problems with sexually suggestive photographs of them being taken, shopped, and released in the past. When will these lil’ crazies learn to stay away from cameras and role-playing? Apparently never. In 2006, Katie Rees had her title revoked after pics — depicting her doing suggestive things in a night club — were released, and not long after that Trump sent Tara Conner to rehab, primarily for underage drinking and a sex scandal.

Apparently, the picture has since been removed from her Facebook page, and it’s causing some people to wonder whether or not the photo was real to begin with. Kelsall is undoubtedly worried as to whether or not her crown will be revoked. While the Las Vegas Review couldn’t reach Shana Moakler, the rep for Miss Nevada, FOX News has since been able to get a hold of the rep and gather a statement on the alleged scandal.

“The Miss Nevada USA organization stands behind Jade Kelsall 100 percent and has no intentions of removing her crown,” Moakler tells FOX411. “There is no photo considered salacious or scandalous to our knowledge, and we are saddened to see a poor attempt to berate a young woman who has represented her state so proudly.”

What do you make of the Miss Nevada Jade Kelsall photo scandal? The Miss Nevada racy photo has allegedly been removed from Facebook — but do you believe it was ever there to begin with?