NeNe Leakes Reveals She Is Now The Proud Grandma Of Bri’asia Bryant! (Photo) 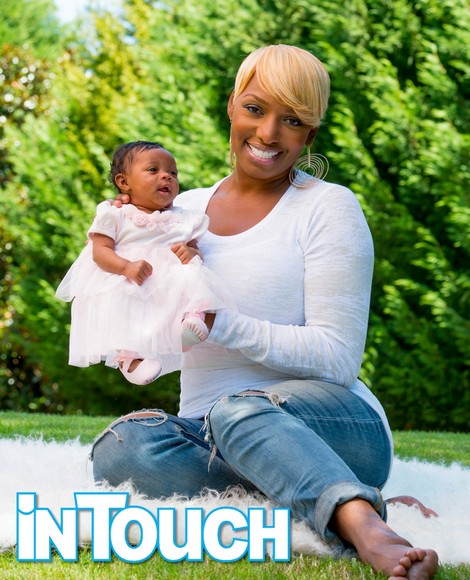 NeNe Leakes became a grandmother 2 months ago when baby girl Bri’asia Bryant was born.  But only now has NeNe chosen to reveal this wonderful news to In Touch saying: “Forty is the new 30. I’m a sassy, fashion-forward grandma!”  As we know from seeing NeNe on various TV shows there is no keeping her down – she has more attitude than the defensive line of The Green Bay Packers!

NeNe says she was shocked when she learned from her 22-year-old son, Bryson, that he and his girlfriend, Ashley Hill, 21 were expecting a baby girl.  It seems that Bryson was hesitant to tell his mom about the baby as he wasn’t sure how she’d react.

In Touch reports: “I only found out about everything because I ran into Ashley when she was more than six months along,” the Real Housewives of Atlanta star tells In Touch in an exclusive interview. “I said, ‘You look pregnant.’ And she said, ‘Hasn’t Bryson told you?’ But he hadn’t because he knew that I wouldn’t approve of him having a child so young.”

“I didn’t feel like he was ready for such a big responsibility,” she says. “I was his age when I had him, so I know how tough it is. I didn’t want him to make the same mistakes that I did. I needed to let it sink in.”

Any mother worries for her children and after being a young mom herself, NeNe was naturally concerned for Bryson and Ashely.  But it’s impossible to resist a baby and once little Bri’asia was born in mid-June, NeNe’s grandma-heart took over: “I always wanted to have a girl,” she says, “and now I have one! She’s just adorable.”

NeNe not only dotes on little Bri’asia but she is assisting the new parents in practical matters as well: “I paid for everything in the nursery: the clothing, the diapers. I don’t want her to feel strapped.”  NeNe told In Touch that she’s gone completely “crazy” buying gifts for the baby, including “little dresses, sparkly headbands, and Gucci shoes … We just love her!”

To get the full details on NeNe’s new grandchild and to see all the photos make sure to pick up your copy of In Touch print edition on sale in newsstands now.