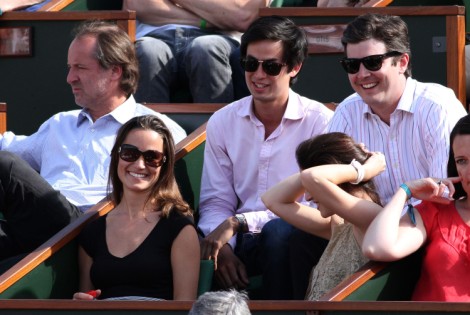 Paris hasn’t been kind to Pippa Middleton but that isn’t stopping her from taking a little sightseeing vacation with a mystery man this week. The cardigan sporting dude picked Prince William’s sister-in-law up from the airport early Sunday morning and they later rented bicycles and rode around the city and even stopped for a croissant and coffee close to the iconic symbol of love, the Eiffel Tower.

An onlooker told the Daily Mail: “You certainly wouldn’t think she was a relative of the future King of England. She was dressed in a smart casual blazer and designer jeans, but otherwise just looked like another tourist tottering around town. Pippa was laughing and joking with her friend the whole while. They were having a great time.”

This isn’t the first time Pippa and the mystery man have enjoyed each other’s company. She was spotted at the French Open with him last year. At the time he was asked if he was her boyfriend and he replied, “No, I’m just a friend.” I posted the pic of them at the tennis match. I’m pretty sure he’s the one in the pink shirt.

Good for you Pippa! She did just as I told her. Well, actually I told her to get her photo taken looking super serious on her way to work but this is fine too. She returned to the scene of her infamous gun crime, and she not only behaved herself, but she rented a bike for a euro! That’s a stark contrast to Prince Harry’s scandal in Las Vegas where he and his friends looked like spoiled douche bags burning through money like it’s nothing while ruining their reputations and relationships in the process. Conspiracy? I think not!

The only thing I’m kind of bummed about is that Alex Loudon wasn’t there with her. Sturdy Alex would have provided further proof that Pippa has put her black sheep behavior behind her and is much less of a  liability for the royal family. As far as I know she and Alex are still together. This isn’t the first time she’s vacationed away from him with another guy. Last year she was spotted in Spain with George Percy citing rumors the two were hooking up but they’ve always defended they were just friends so I still have hope for Alex. She probably wanted to go to Paris for a couple days and needed a place to shack up. Apparently this guy lives on the Champs Elysee. I’d put up with the most annoying friend and banal conversations to borrow that type of real estate for a mini break.

Do you think it’s a little suspect that Pippa’s surfacing right when Prince Harry is hiding away? Do you think Kate Middleton gave her a serious talk before she left? I imagine her saying, “Look Pippa, we can only take one fowl up at a time. If you get caught with your knickers down so help me!”

Harry didn’t just ruin it for himself. He ruined it for everybody!