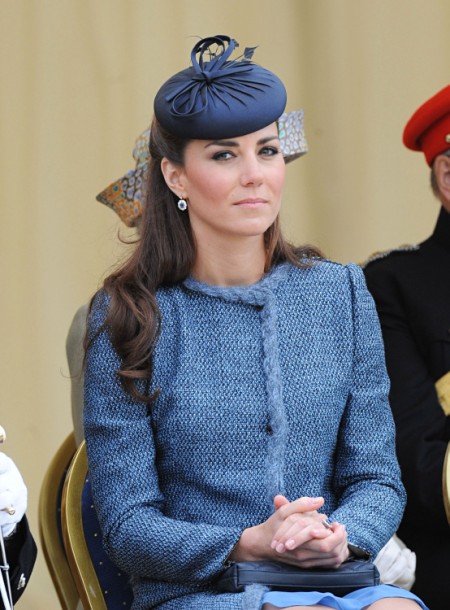 By now the whole world has seen the leaked photos of Kate Middleton’s bikini body that were published in an Australian magazine today while the royal couple were on honeymoon last year in the Seychelles. It’s hard to look at the pictures without wincing at how frail the Duchess of Cambridge has become, and whether the palace wants to or not, it may have to address her staggering weight loss.

The rumors have been around ever since Kate made the comment about being on the weight loss plan before she married Prince William in April of last year. She’s managed to keep the eating disorder critics at bay with her flowy dresses and figure-covering jackets, but now that we know what the woman looks like with barely a stitch of clothing on, I’d say there’s cause for some concern.

But you know what’s interesting? As of right now none of the UK’s biggest tabloids are featuring the story. There’s hardly anything about the honeymoon pics in The Daily Mail, The Sun or The Mirror. To put this into perspective, The Mail will write a story every time Kate Middleton shops for socks. They’re burying the story. Oh, I wonder why?

So far a St. James’ Palace spokesperson has only told Celebuzz, “The Duke and Duchess of Cambridge’s honeymoon was obviously a private occasion, and we would ask people to respect their privacy” but the royal couple is said to be furious over the intrusion of privacy. Are they so upset about the intrusion or about what people will say about Kate’s body? Prince William has always said he wanted to try to live a normal life with his common wife and not allow her to be bullied by the media like his mother. He always believed the media’s pressure to be perfect led to Princess Diana’s battles with bulimia and anorexia and her ultimate demise in a paparazzi-chased car crash in 1997.

The pictures are indicative that Kate’s insecurities are driving her down the same unhealthy road. I’m really not trying to make something out of nothing. I understand most girls want to look tiny for their weddings but did Kate go too far? And is she still? Because despite all the “Kate Middleton pregnant, baby bump spotted!” stories out there, she really looks no different. Remember how she managed to make Nicole Kidman and Reese Witherspoon look like beasts when she talked to them in LA last year? That’s hard to do.

It’s safe to say the palace cannot have another Diana problem. In fact, the royal family has pretty much beaten us over the head with the fact that they’ve handled Kate with kid gloves in the hopes that she would transition into royal life much more smoothly than her predecessor. They do not want another princess with an eating disorder. Something’s got to happen because, whether they like it or not, Kate and Wills will be papped again. It’s inevitable. Those two love vacations, and if Kate continues to wear a bikini and have shoulders twice as wide as her hips, then she’s going to have more problems from the media. But what can the palace do? They can’t keep pressuring newspapers to bury the pics. Can the Queen order Kate to eat? Will William stop taking Kate to luxurious, top-secret beaches? That doesn’t seem fair. And really, none of this is. The couple were relaxed and thought they were alone and now the whole world knows about Kate’s unhealthy-looking body and will have an opinion.

The royal family never talks about their private lives, so I hardly doubt a more direct, formal statement will be made, but Kate’s going to have to make some public outings with a slight bump under her mid-section to get people quiet about this one. Because, naturally, people are going to blame her weight on the fact she’s not pregnant yet. I tend to believe if Victoria Beckham can get pregnant, anyone can, but Kate makes Posh Spice look like she raids the kitchen at night while she’s on the phone to Katie Holmes.

Kate and William have been adamant about wanting to be a modern, proactive royal couple who want to help change lives through charity while living like normal people. We always hear Kate doesn’t want to be a clothes horse; she doesn’t want to be hounded about weight; she doesn’t want people obsessed with her family. Unfortunately, some of that is never going to happen because she’s a young, beautiful princess, but if she truly wants her actions to speak for her, she’s going to have to put on some pounds. If she doesn’t, the scrutiny and prying lenses will only get worse. Do you think Kate looks healthy in the honeymoon photos? How do you think the palace will address the new onslaught of rumors? Will we see Kate in a photo-op with children running under her feet, with her hands strategically placed on her belly very soon?