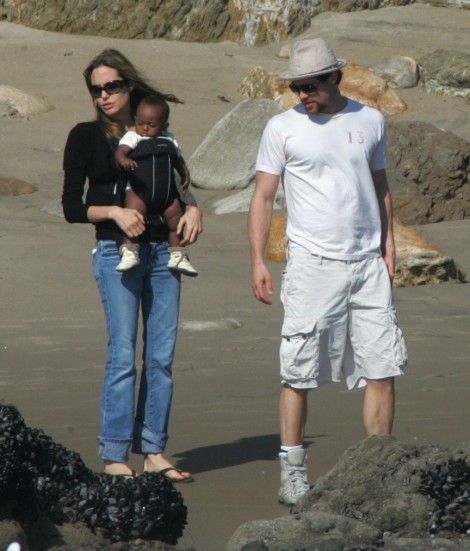 You didn’t think the love triangle between Angelina Jolie, Brad Pitt and Jennifer Aniston would disappear now that Jennifer’s engaged to Justin Theroux, did you? Why would it? It’s still a great sell! Case in point with a new story coming out of the National Enquirer stating a letter from Angelina to Brad was found on a plane in 2005 after Angelina went to visit Brad on the set of his Jesse James movie. A source tells the magazine the letter reveals Angelina’s devious intentions to manipulate and ultimately steal Brad away from his wife from the very beginning!

In the letter, Angelina told Brad that soon after they met, she knew he was the only man that she wanted to have babies with,” an insider revealed.

“She also said it was unfortunate that people were already hurt, but it was fate that they’d be together, and what they had was bigger than anyone or anything – Jennifer Anis­ton included!”

He’d announced his separation from wife Jen in January 2005 and had made his relationship with Angelina public during an April 2005 trip to Africa with the “Tomb Raider” beauty. The letter reveals, however, that Brad had split with Angelina after that trip to Africa, needing time to think if he’d made the right choice.

Angie wrote that she wasn’t worried as she knew he’d come back to her because they were soul mates,” continued the insider. “She made it clear she knew she was the puppet mas­ter.”

A pal of former “Friends” star Jen added: “Given some time, Jen and Brad may have been able to work things out. But this new information shows Angelina was never going to allow that to happen. Whatever Angie wants, Angie gets.”

God, do you remember 2005? How amazing when all that went down. First you had Brad and Jennifer on vacation with their arms around each other and then months later Brad’s with Angie in Africa getting Zahara. It has to remain a highlight in any gossip lovers life because we’re still talking about it SEVEN YEARS LATER!

First of all you have to wonder why this letter is coming out now. Obviously someone could have made a lot of money selling it to the magazines years ago. That alone makes me think it’s bullsh-t but that doesn’t mean I’m not enjoying every juicy bit out of it. Did you know Brad and Angie broke up after their African trip in 2005? That seems weird since he just left his wife for her. His head had to have been spinning with Angelina’s magical vagina and the guilt over his failed marriage. But I just don’t buy this. We have to look at what’s happening now. Jennifer’s happy again. Jennifer might be pregnant. Jennifer’s finally gotten over Brad. Unless Angelina gets knocked up or married she has to look like the villain. It’s the yin and yang of life.

Do you think Angelina stole Brad and manipulated him to leave his wife? Do you believe this letter really exists? If so, why is it just coming out now?