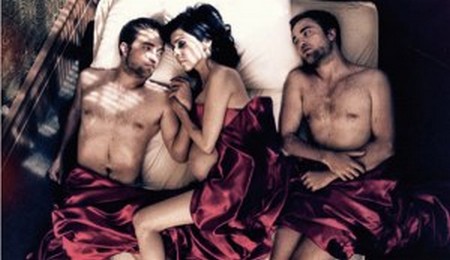 There are new pics with Twilight star Robert Pattinson in bed with a brunette and no it’s not Kristen Stewart and no he’s not sparkling.

Rob posed in a series of shots for French magazine, Premiere, some with only a skimpy bed sheet covering his supposed naked body and others with a gaping wound down the center of his chest. The disturbing photos are meant to highlight Rob’s newest non-Twilight movie, Cosmopolis which will debut at the Cannes Film Festival next week.

The David Cronenberg film looks like it was quite the acting departure for Rob whose foray into playing characters who do not suck blood has critically been a bumpy one. This movie might actually win Rob fans who aren’t female, teenagers, or crazy mothers.

No word on what his biggest fan, girlfriend Kristen Stewart, thinks of the movie or if she will be joining him in Cannes. The couple is very private over their relationship but Rob’s Bel Ami co-star, Christina Ricci, told the ladies on The View that Kristen was known to stop by the set last year and give support on occasion. “She came to visit every one and a while,” Christina revealed. “He had his birthday while we were filming so she was there.” Robert’s birthday is coming up again on May 13, so maybe Kristen will make a stop in Paris after all.

Rob and Kristen were last seen together leaving Vancouver for the final time as the reshoots for The Twilight Sage: Breaking Dawn – Part 2 finally came to an end. But I wouldn’t worry Twi-hards, just because Edward and Bella’s story is over doesn’t mean the same for Rob and Kristen. Just yesterday, Kristen was spotted in New York City sporting Rob’s favorite sweat-stained, Baltimore Orioles hat. Love and B.O. are still in the air for the pair.