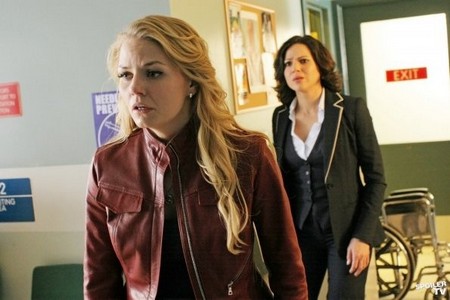 ABC’s # 1 Drama – Once Upon A Time returns tonight with a new episode.  This is the finale of season 1 and it is called “A Land Without Magic” and we will be live blogging it with all the up-to-the-minute details.

On last week’s episode Henry pleads with Emma to stay in Storybrooke and continue her quest as the savior of the fairytale dwellers, and Regina concocts a plan that could rid her of Emma forever.  Unfortunately her plan backfired and when last week’s episode ended Henry’s life was in question.

Meanwhile, back in the fairytale land that was, Snow White enlists the aid of her fellow fairytale cohorts to attack the Evil Queen and save Prince Charming’s life.  If you missed the episode you can read our full and detailed recap here.

On tonight’s show Emma and Regina team together in order to find a way to save Henry’s life.  The preview for tonight’s episode shows Emma standing over Henry saying, “I should have believed you.”  Will Emma finally start to believe in magic?  Meanwhile, in the fairytale land that was, Prince Charming attempts to escape from the Evil Queen’s clutches in order to reunite with Snow White who, unbeknownst to him, has already taken a bite of the Queen’s poison apple.

We will be live blogging the show with all the up-to-the-minute details at 7PM EST so make sure to come back to this spot and watch the show with us. While you wait for the recap you can watch an extended sneak peek preview of tonight’s episode here!  Make sure to refresh often to get the most up-to-date updates!!

Tonight’s recap: Tonight recap opens up in the fairytale. Prince charming is trying to get of jail where the evil Queen put him. The guards come to get him and tell him he’s going for execution. He pretends to fall on the floor and he attacks the guards – he knocks them out,

Current Time – They bring Henry into the hospital, Emma’s with him. The doctor asks what happened and she tells him he was poisoned-the Dr. says there is no sign of him being poisoned and Emma shows him the apple turnover and tells him he was poisoned. The Dr. tells her he needs to know more because it does not look like poisoning.  He tells Emma right now there is no explanation.

Emma empties out Henry’s backpack and his storybook is there. She picks it up and she starts to remember the fairytale.  Regina walks into the hospital and Emma takes her and throws her into the storage room.  She tells her the apple turnover that she made for her, Henry ate. Regina says it was meant for Emma. Emma then says it is all true isn’t it?

Rumpelstiltskin tells Prince charming he will get nowhere in the forest but magic will help him.

Current Day: Emma and Regina comes to see Mr. Gold and he tells them he heard about Henry and he tells Regina he told her magic comes with a cost. Rumpelstiltskin tells them that he can help them. He kept a potion for a rainy day. Mr.Gold tells Emma that given her the potion is not a problem but getting it is problem.

Mr. Gold tells Emma she must be the one to get the potion. Regina doesn’t want to trust him but Emma tells her they have no choice.

Mr. Gold asks Regina if she still has her in the basement? Regina says she does and Mr. Gold takes out a box. Emma asks Mr. Gold what that is and he tells her it is her father’s sword.

In the hospital with Henry-Emma tells Henry he was right about the curse and she apologizes for not believing him.  She takes his Storybook and puts it under his pillow and tells him it is for when he wakes up.

Regina comes then and Emma tells her she has 10 min. Emma and Regina are going to meet later.

Regina comes in and apologizes to Henry. Jefferson is there and he tells her he is there to collect and he wants to know where are his daughters. She tells him that since Emma was supposed to eat the apple but Henry did their deal is null and void. Jefferson is mad but Regina tells him he won’t do anything.

Emma is meeting Regina at the library – Emma goes up the wall and it flies up  – there was a hidden safe behind it. Regina opens the safe and Regina tells her to get in. Emma agrees to go down, Regina tells her she trapped someone there and she is in a different form. Emma tells Regina if Henry dies then so will she. Emma has her sword Regina tells her what she will have to do when she gets down the hole to the cave.

In The fairytale Prince Charming comes to see Maleficent and he asks where the beast is that rules over the castle. She tells him she is the beast and she disappears. He tells her to show herself and a fire breathing dragon appears and the doors lock.

Emma is in the caves below the library walking with her sword and behind her an eye opens. It is a fire breathing dragon.

In the fairy tale Prince Charming is with the fire breathing dragon and he has the potion Rumpelstiltskin has given him. Meanwhile in current time Emma is with the same dragon.

Emma is still with the fire breathing dragon in the basement.

Mary Margaret is reading the story of Snow White to Henry at the hospital to Henry. While she’s talking to Henry the machines next to him starts to beep. She calls for the doctors and they start trying to resuscitate Henry. An intern who was in the room comes down and the nurse asks if there’s any hope for him. He says doubtful and then we see who it is – it is Jefferson.

Jefferson gives the nurse a coffee and it makes her pass out Jefferson walks down the hall and he opens the room, in the room is Belle.

Jefferson tells her to go and find Mr. Gold and tell him that Regina locked her in the room.

In the fairytale Rumpelstiltskin is waiting for Prince Charming when he comes out of the water. He tells him he did an impressive job and he gives Prince charming his ring back. Rumpelstiltskin tells him with the ring he will find Snow White.

Emma is in the cave with the fire breathing dragon and she takes her gun out and shoots him It is not working and she sees her sword that she dropped and runs to get it. Emma gets her sword and it goes into the dragon’s throat. The Dragon explodes and Rumpelstiltskin’s potion pops out in front of her.

Prince Charming is looking for Snow White and comes upon the Seven Dwarfs. They tells him it is too late, he asks to say goodbye. He bends down and kisses her and she wakes up. She asks her how he found her and shows her his mother’s ring he tells her it led him back to her.

He gets on bended knee and asks her to marry him. She responds ‘What do you think?’

Snow White tells Prince charming they should they should take back the kingdom from his father that her stepmother.
Current time: David is packing and getting ready to leave town – he gets in his truck and drives away. Emma is coming up the elevator with the potion and the elevators stall. Emma yells and asks where Regina is and Mr. Gold shows his face and says Regina abandoned her. Mr. Gold tells her to throw the potion up and she does and Mr. Gold leaves with it… the snake!

When she gets up the elevator Regina is tied up and she tells Emma that’s Mr.Gold tricked her. Emma’s phone rings and it is the hospital. Emma and Regina get to the hospital and the doctor tells them they did everything they could, they tell them that they’re too late and apologize.

Emma walks in and is devastated as Regina watches clearly upset as well.

Mr. Gold has the potion that he put in a box. Belle walks in and asks if he is Mr. Gold. She tells Mr. Gold that she was locked up and somebody told her she should tell him that Regina locked her up. She asks if that means anything to him. Mr. Gold says you’re alive you’re real, she did this to you. Belle tells Mr. Gold she was told he would protect her. Mr. Gold is really upset. She asks if she knows him and he says no but you will.

In the hospital Regina is sobbing and so is Emma. Emma walks over to Henry as her tears fall and she kisses him and tells him she loves him. All of a sudden magic happens and Henry comes back alive. Emma tells Henry that she loves him. Henry tells Emma that he loves her too.   Meanwhile around the town the whole curse is broken. Prince charming as he is just about to leave StoryBrooke remembers everything and stops his car.

Emma asks Henry what is going on? Henry tells her he thinks she broke the curse. Regina says no, no. The nurse tells her if she were her – your Majesty, I’d find a place to hide. Regina tells Henry no matter what anyone tells him she does love him and she runs out of the room.

David is walking in the town, he sees Mary Margaret. He yells for Snow and she turns around and says ‘Charming’ and she says ‘you found me’ and he says, ‘Did you ever doubt I would?’ They kiss.

Regina is in Henry’s bedroom crying.

Mr. Gold has Belle in the forest and he tells her they are very close. She calls behind him and says Rumpelstiltskin, I remember, I love you and she embraces him. Mr. Gold says yes, yes I love you too.

Emma asks Henry why if the curse was broken they didn’t go back to the fairytale. Henry tells her he does not know. Emma gets up and looks out the window and sees the purple smoke coming through the town. Emma asks Henry with that is and he says something BAD.

Meanwhile, Regina is looking through the window and she has an evil smile on her face and she is laughing…  Magic is her game! The purple smoke covers everything in the town. We know magic is back and the clock once again stops.

Always get your original recaps here at CDL – we are first and we are awesome!  Nobody gets you close to the action accurately and quickly like we do here at CDL!