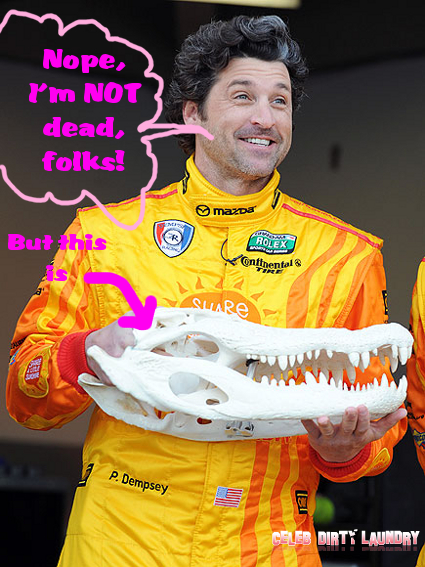 Patrick Dempsey is one of the latest celebs to be subjected to a celebrity death hoax, but he’s not too angered by the whole ordeal and would just like his fans to know that he is 100% alive. Did anyone out there honestly believe he died?

The cruel rumor captured the media’s attention earlier this week after “RIP Patrick Dempsey” began trending on Twitter. The Grey’s Anatomy actor, who is also an avid car racer (the legal kind of racing), was allegedly involved in a fatal car accident . . . which of course proved to be TOTALLY AND COMPLETELY FALSE!

Despite the awful nature of this joke, Dempsey embraced it with good humor and recently tweeted: “Hi, everyone, I’m back from the dead.”

While many people didn’t truly believe the rumor, some were beginning to wonder if something had happened to the actor since his last tweet was nearly a week ago (until his most recent tweet).

Isn’t it funny how, this day in age, if a person forgets to update their social networking profile we automatically assume they’ve died? If you’re wanting to know if a celebrity has really died, come visit us here at CDL — because we only give you 100% truth! Yep, even when I tell you that LiLo is one of my fave celebs . . . that, too, is the truth.