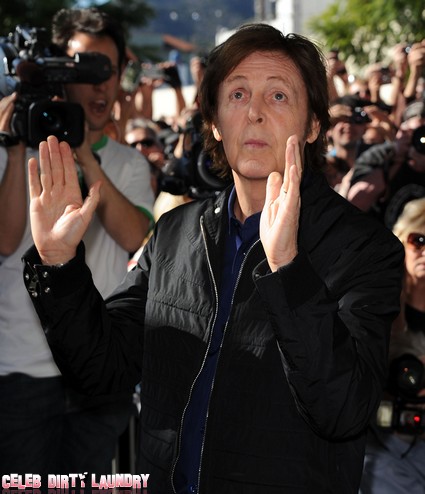 Paul McCartney has stopped smoking weed having already quit cocaine during his Beatles years. Perhaps in light of Whitney Houston‘s tragic death, which was directly attributable to substance abuse, other older celebs will twice at their drug habits.

Paul has smoked marijuana since the 60s, but has now given up the drug so he can be a better parent to his eight-year-old daughter, Beatrice, his child with ex-wife Heather Mills.

Paul told Rolling Stone magazine how he was a serious smoker:  “I did a lot, and it was enough. I smoked my share.  When you’re bringing up a youngster, your sense of responsibility does kick in. Enough’s enough – you just don’t seem to think it’s necessary.”

Paul has also confessed to using cocaine and trying heroin when he was in The Beatles. Speaking about his experiences with the drugs in a magazine interview in 2004, he said:

“I tried heroin just the once. Even then, I didn’t realise I’d taken it. I was just handed something, smoked it, then found out what it was.  It didn’t do anything for me, which was lucky because I wouldn’t have fancied heading down that road.”

“I did cocaine for about a year around the time of ‘Sgt. Pepper.’ Coke and maybe some grass to balance it out. I was never completely crazy with cocaine.  I’d been introduced to it and at first it seemed OK, like anything that’s new and stimulating. When you start working your way through it, you start thinking, ‘Mmm, this is not so cool an idea,’ especially when you start getting those terrible comedowns.”

Paul and his first wife, Linda, who passed away in 1998, both used to smoke marijuana, but he was given a wake up call when he was put in prison for nine days in 1981, for trying to take the drug into Japan during a tour.

Paul did not like prison:  “I kept thinking, ‘What have I done to my family?’ I was thrown into nine days of turmoil. It was very, very scary.”

Do you think celebs disproportionally take illegal drugs? Do you think they usually get into much less trouble than regular people when they get busted?