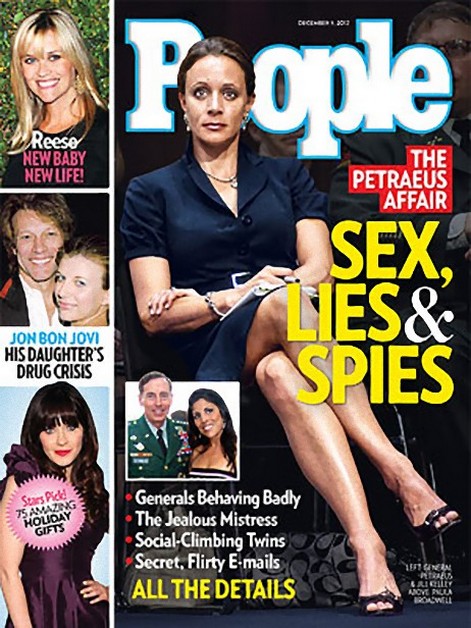 The latest issue of People magazine, December 3rd, 2012, sinks its claws in the headline story of the year, the General David Petraeus affair. Paula Broadwell, the mistress in this sordid tale, is plastered all over the front page ala Sharon Stone in Basic Instinct. The headline reads, “The Petraeus Affair: Sex, Lies & Spies.” Below the headline, the bullet points outline the in-depth article on the General and his indiscretions, “Generals Behaving Badly, The Jealous Mistress, Social-Climbing Twins, Secret, Flirty E-mails.” Then, the magazine alleges, that “all the details” are inside. We never doubted you trusty People magazine, our light in the dark land of celebrity, our lighthouse in the ocean of fools!

Reese Withoutherspoon (Witherspoon) is inserted in the top left corner. Her lovely little tagline reads, “Reese: New Baby, New Life!” Below her is Jon Bon Jovi’s daughter with the tagline, “Jon Bon Jovi: His daughter’s drug crisis.” His daughter was recently arrested at her expensive school’s dormitory when EMS personnel found her unconscious and overdosed on heroin, so this salacious article will merely be an extension and a follow-up. Hey, there’s nothing as juicy as a faux celeb drug scandal!

Below Bon Jovi and his druggy daughter is an image of someone who looks like Zooey Deschanel and Madonna’s love child with a sparkly “Stars pick 75 amazing holiday gifts” button on her boob. Okay, calm down now, People magazine, why do you have to have 75 amazing holiday gifts? Couldn’t it rather have been like, we don’t know, top ten or something? You know 75’s only 25 away from a hundred? And you know a hundred will make our eyes bleed by sunset?

If you’re interested in reading about that naughty little Petraeus man, Reese Withoutherspoon, but Withherbaby, Jon Bon Jovi’s drug addicted daughter, and 75 (count it!) holiday gifts picked by Hollywood, then head down to your local supermarket and grab yourself a copy of People magazine. Trust us. We’re clever (most of the time).