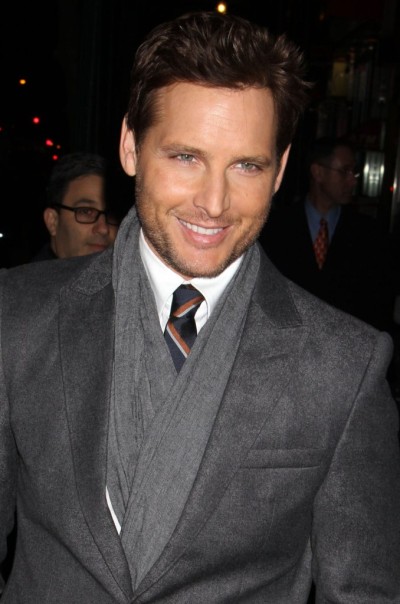 Peter Facinelli has kept his rebound relationship with Jaimie Alexander under the radar for the last couple months but has finally decided it was time to stop hiding – naturally, while all eyes are watching him as he promotes one of the most anticipated movies of the fall. Is this Peter Facinelli And Jaimie Alexander’s coming out party?

It would seem that way. The two looked cool and collected when paps caught them getting a bite to eat in NYC a couple days ago. They left The Penny Farthing holding hands, seeming quite together. “They had a great time,” a source told Celebuzz. “They looked like a very cute couple.”

This is the first girlfriend for Peter who split with long-time wife, Jenny Garth,after eleven years of marriage. She moved on with a hot body and some amazing Old Navy commercials and he rekindled a friendship with Jaimie who he filmed Loosies with three years ago.

Good for Peter and everything. It’s always nice to see someone happy. There. Now onto the bitching. This has got to be the worst for Jenny. Yes, she’s also been linked to men since the divorce but none of these men are people she had relationships while she was married. She’s got to be wondering if they cheated on her while they co-starred together. I would totally be thinking that! It sounds possible. Or she’s got to be thinking they wanted to be hooking up while they were filming. And that brings us back to the age-old question of what’s worse – cheating or wanting to cheat. Jenny shouldn’t care at this point, right? The relationship is over. They’re both moving on. Jenny looks better than she has in years (although losing tons of weight doesn’t necessarily look better). But still… this would be hard for me.

What do you think of Peter Facinelli’s girlfriend? Do you think Jenny rips on how she spells her name? I would but I’m a catty biotch. Would you rather your ex-husband moved on with someone he already knew or someone completely new?