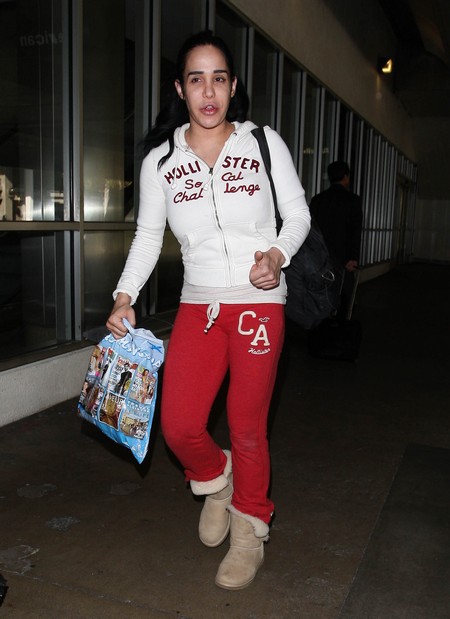 Octomom Nadya  Suleman’s 14 children are living in the most horrid conditions of neglect and squalor according to reports and pictorial evidence.  TMZ did some excellent investigative reporting based on a complaint by Octomom’s hairstylist, Stephanie, who made a formal compliant to La Habra police Tuesday afternoon.  Amongst the many disgusting features of Octomom’s parenting is that while she gets her hair done by the stylist she locks her children in a bedroom by propping a chair against the door so that they are trapped.

La Habra police and the Orange County Department of Children and Family Services went investigate promptly and were distressed at what they saw.  After spending 90 minutes in the home they decided that while further investigation was required the children were not in immediate danger – and left them there!  What kind of low standards does this organization have?

Pictures showing two kids defecating in a portable toilet in the backyard made sense since the house has only 1 working toilet as the plumping is ruined.  Many of Octo’s children are forced to sleep on the floor according to Stephanie.  The stylist tells TMZ: “The kids are in desperate need of help, and I tried to help and she’s not open to anyone helping her.”

Stephanie adds that Octo’s boys are wearing girl’s clothes, and all the children are sadly neglected and Nadya is simply incapable of caring for them.  Her other claims include that the children appear malnourished and unwashed.  Sounds like time a doctor examined these children.   Too see the shocking photos Click Here.

Octomom is a great argument for licensing parenthood.  Why should a person be allowed to avail themselves of modern technology to have more children than they can possibly care for?  Any form of human rights abuse must be prevented and Octomom is obviously abusing her children’s rights.  If she is incapable of caring for them properly then she should be provided with the help she needs to do so.  If she is mentally incapable of caring for them, regardless of resources, then the kids should be removed from her home and placed where they can be loved and cared for.  Let us know what you think in the comments.