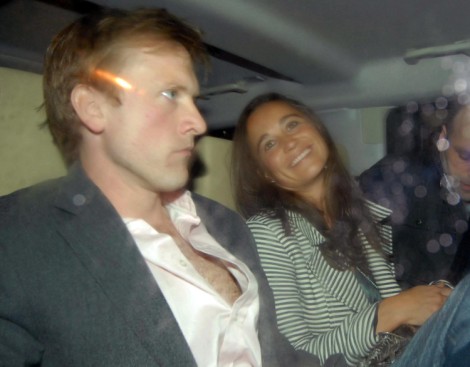 Poor Pippa Middleton may have missed out on the Christmas dinner invite but that doesn’t mean Queen Elizabeth doesn’t have a heart or the stomach for her upstagey face all together. Pippa’s going to Sandringham for the royal family boxing day shoot. Relax PETA people. The animals have nothing to worry about because Pippa’s going husband hunting!

Or maybe she’s just going for the food? According to Bohomoth, this will be the first year Pippa makes an appearance for Boxing Day. There were all those rumors last year she was supposed to accompany Kate since that was Kate’s first Christmas with the royal family and they were afraid it would be too much for her but Pippa never showed. But thank goodness for second chances! Now Pippa finally has a chance to bag a royal husband.

I know, I know, she’s supposedly still dating Tom Kingston and was seen out with him last night at a nightclub in London but when have boyfriends ever gotten in Pippa’s way of social climbing? I only bring up the Pippa Middleton/husband idea because Boxing Day is when the lesser royals and close family friends come to Sandringham. Usually Philip leads a shooting party and everyone goes around killing things. Sounds fun! Phil couldn’t make it last year because he was in the hospital so I wonder if his health will be up for it. So there will be plenty of young, blood thirty men around for Pippa to flirt with. But why can’t Prince Harry be there?! If there’s a reason to be anti-war, this is it. Afghanistan (and the naked shenanigans that got him sent there in the first place) is keeping Harry away from all the fun and Pippa! Just imagine: Pippa and Harry engulfed by the lovely country breeze, wearing turtlenecks and Hunter boots holding rifles. How do you not fall in love in an atmosphere like that?