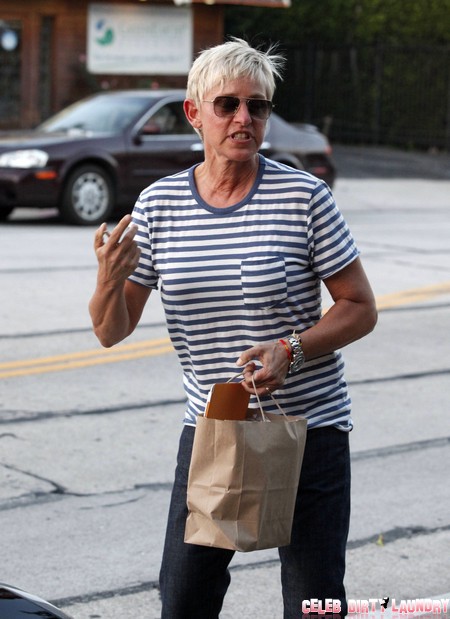 Hollywood’s most famous vegans are fighting over their diet.  Portia de Rossi (of Arrested Development fame) and Ellen Degeneres (of Ellen, duh) were married in 2008 and became vegan shortly before.  Allegedly, Portia thinks Ellen excessive dieting is making her look like the CoverGirl for Old & Wrinkly Weekly.

For those of you who don’t know, veganism is typically defined as a diet that excludes all animal meats and byproducts, like milk and eggs. Many vegans also avoid wearing leather, fur, and silk.  Do they avoid swatting biting flies and mosquitoes?  This is why I love Ellen, she has total compassion and walks what she preaches.

However, The National Enquirer is reporting that Portia, who once struggled with an eating disorder, is starting to recognize unhealthy signs in Ellen’s eating habits. We’re hearing that Ellen has now eliminated most processed foods from her diet (perhaps moving towards raw veganism, in which nothing is cooked above 117 F?), and that a sudden drop in weight has Portia worried!

A friend reported, “Portia was totally on board when Ellen eliminated all refined sugars from her diet and went back to becoming a vegan. But now she feels Ellen’s looking gaunt and unhealthy – and has simply gone too far!”

Apparently Ellen’s response to Portia is “butt out!”

Well, Ellen is an adult, and her marriage has seemed really happy and stable so far, so I’m not in a rush to believe that the pair is bickering. Besides that, being a faithful Ellen viewer, I can attest to their personal chef, who apparently makes vegan BBQ like you would not believe.

While it may be true that Ellen has dropped some weight, I would bet that she is living a healthy and happy life, after her heart attack scare last year, and that the calm after the Naked Prince Harry storm is forcing celeb gossip junkies to pull at straws.

What do you think? Does Ellen look too thin? Is cutting processed sugars really such a bad decision? Is it possible that Ellen is a healthy weight, but compared to the 59% of American adults who are obese, she looks anorexic?

A few snaps of Ellen and Portia