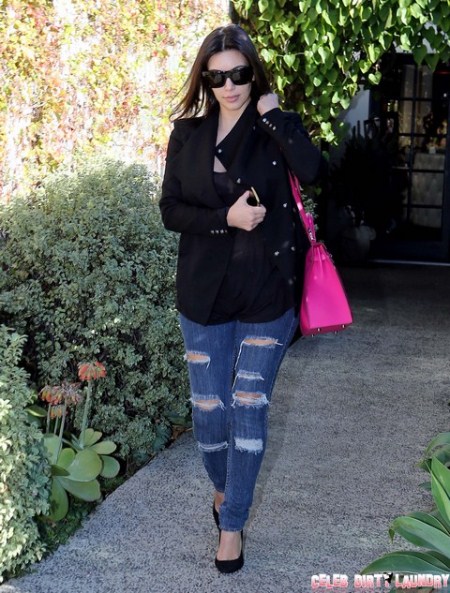 We knew Kim Kardashian was just playing up the drama last season on Keeping Up With The Kardashians when she sought out fertility treatments and considered freezing her eggs. The plastic surgery ridden reality star has been dating rapper Kanye West almost since she announced her divorce from Kris Humphries last year. Rumor has it the new couple are waiting for her divorce to finalize before they tie the knot, and Kim has insisted that this wedding will be small and off camera. But Kim’s legal battle against Humphries may be loosing ground, as a new source reports she is pregnant with Kanye’s baby.

A close source told National Enquirer, print edition December 31, 2012, “Despite all her talk about exercising harder and eating healthier, it’s obvious that Kim has gained at least 10 pounds in the past few weeks, and it all seems to be around her midsection.” This comes in the wake of Kate Middleton’s pregnancy—the British royal actually looks thinner and thinner as the weeks go by! But Kim is taking her baby seriously, “she’s given up alcohol completely. And she confessed to pals that she and Kanye are shopping for a family friendly home in Los Angeles together.”

Of course, Kim will probably wait to announce the news in some outlandish, gaudy way. Perhaps a new line of baby clothes, or a 4-hour long E! special of her trip to the gynecologist. As fun as that show would be, it sounds like we may get the news as a Christmas gift. “When a close friend asked Kim point blank if she was pregnant, she slyly responded, ‘That would be the best Christmas present ever!’”  The couple have been spending more and more time with Kourtney Kardashian’s kids, Mason and Penelope, practicing for when their baby comes.

“Kim and Kanye are overjoyed, as are Kim’s family. She’s wanted to be a mom for years—and now that wish is finally coming true.” I guess that her wish for a baby trumped my wish for no Kardashian to ever reproduce in the cosmic wish fulfillment center—too bad. Don’t get me wrong, her nephew Mason is a cutie, but do we really want those genetics spreading around? Do you think Kim and Kanye would make good parents?