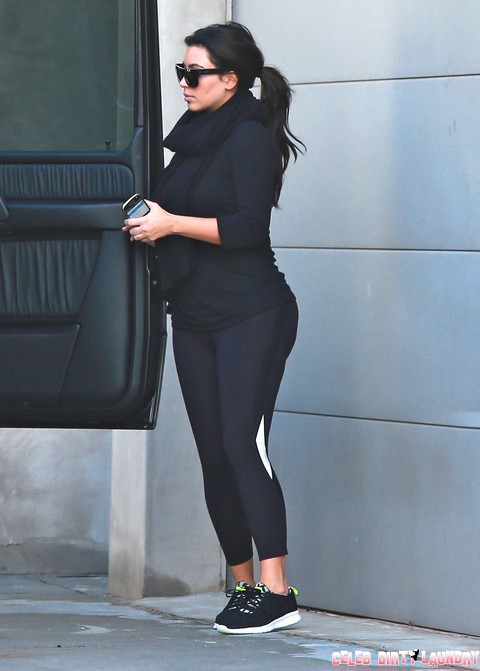 Well, I guess I have to give up on my hope that Kim Kardashian was just eating a lot of Christmas cookies and that’s why she has bulked up so much in the last several weeks. The fact is this chick really IS pregnant and she is so sick that a doctor was actually called to her home to help treat her continuous vomiting late last night. Media Take Out reported it first but I’m telling you, an announcement will be coming sooner rather than later. Why, you ask?

Because I’m not sure who loves attention more, Kimmie or her baby daddy, Kanye West. Actually scratch that, Kris Jenner, Kim’s momager loves the attention that she gets off of her kids lives’ so expect her to be screaming news of Kim’s pregnancy from a rooftop somewhere in Calabasas.

Remember a month or two ago when Kim felt snubbed by Kate Middleton for not having tea with her? Remember how she was crushed and slighted because she has tried to get the duchess’ attention for a while now? I’m sure this bout of morning sickness will instantly be compared to the severe case that has forced Kate to chop her work schedule down to precious little. In a way Kim now really does have something in common with Kate! Unfortunately pregnancy is it because I hardly see Kanye becoming the same kind of active, engaged and involved father that Prince William is likely to be.

I’m sure at the very least this will ensure another season of a Kardashian reality show plus a spin off for Kanye and Kim as new parents, right? Hey if the cameras roll in their home then that will ensure that their new baby sees their parents at least a little bit before being passed off to a skilled team of nannies!

Are you happy for Kim or do you think she has decided to start a family at the worst time and with the worst kind of guy? Tell us your thoughts in the comments below!