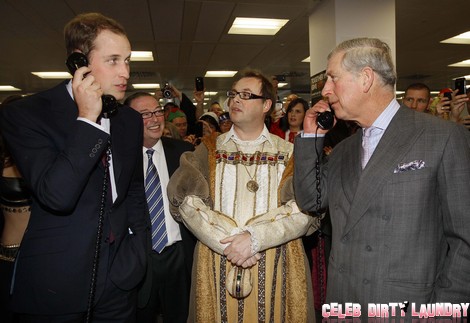 Prince Charles is like that distant uncle who cheated on his wife, had a mid-life crisis, and died from an overdose of Oreos one rainy morning. He is just not winning anymore, especially after he was voted the least popular senior royal with a 21% approval rating. He tries, though. He tries really hard. He yearns after that diamond throne and the title of King of England. He rehabilitates his cow-faced wife, Camilla Parker-Bowles, on a weekly basis, and he constantly listens to the heartbeat of a phantom civilization. In actual fact, Prince Charles is so far removed from reality that he should be given the title of “King of La-La Land.”  Many royal watchers have commented that Prince Charles should step aside and allow his ubiquitous son, Prince William, to assume the throne. His son is, after all, the most popular royal in modern history.

According to a new article by Tom Sykes at The Daily Beast, “There is no rift between Charles, William, Kate [Middleton] and [Prince] Harry, but after the summer of scandal there is a sense that it is time for the young royals to move on. They want to do things differently than their dad. To this end, William, Kate, and Harry are moving their staff and center of operations to Kensington Palace, setting up a mini-court there early next year.”

The monarchy is moving into a modern era. Gone are the days of a stiff-upper-lip rule and chest-high tailored pants, gone are the days of archaic tradition and pointless waving from a balcony, and gone are the days where Prince Charles is treated like a frail heir with too many women on his hands. The marriage between Kate and William led the monarchy into a popular, social media network driven era. In the days of William’s mother, Princess Diana, scandals rocked the royal family and twisted the diamond encrusted core of the monarchy. The Queen has since closed up the wounds of the Diana era, and took it upon herself to stand back and allow the Windsors to follow the road less traveled.

The Prince Harry scandal in Las Vegas caused uproar amongst media outlets, but no massive blowout followed, and nothing crippled the monarchy as was first alleged. Kate Middleton’s topless scandal became the focal point of millions of journalists all over the world, but her nip-nips were viewed in a positive light, when UK citizens started to question the value of privacy amongst the royals. The Diana era is a long-gone reminder of the staunch practices of an antiquated and disorganized monarchy. Prince Charles knows this. The world knows this. And his children know it.

Fortunately, Prince Charles’ rule as King of England will be short lived. Not only is his age a factor in his reign, but Prince William’s popularity will overshadow any and all actions taken by Charles during this time. His short reign will be stained by poetic justice, karmic retribution, and the sky blue blood of his inheritance. People don’t want the stoic image of Charles to become the face of the monarchy; they want the youthful and in-touch faces of King William and Queen Catherine to lead their great nation into a golden era. Unfortunately, the Queen of England will probably have to hand over her title to Charles when she dies or abdicates, rather than to Prince William. Only a change in British constitutional law would allow such an upheaval.  But laws have certainly been changed before and could be again.

Soon, however, the Queen of England will pass away and the people of the United Kingdom will amass like a tumor at the palace gates. There, wreaths will be placed, and tears will be shed. Prince Charles, the soon-to-be King of England, will have joyous celebrations in his private quarters with his wife, Camilla Parker-Bowles, and his two sons; who will not only mourn their grandmother’s death, but will also curse at their ancestors for allowing such a dimwitted fool to take charge of the highest honor in the land.  The United Kingdom will be separated, and the least popular senior royal will drive the monarchy deep into the cesspits of old-fashioned tradition and depression.

Only Prince William and Kate Middleton’s revolutionary ideologies and popular appeal would be able to breathe life into a weak and overhyped monarchy. Step aside Charles, and rather let your son take the reins to transform the opinion of billions.