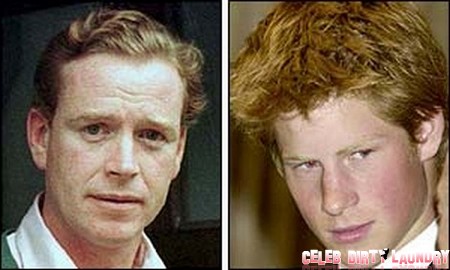 Oh baby, oh baby, who for is thy baby? This was the question asked by Royal Palace officials and the Queen of England herself when they demanded that Prince Harry be subjected to a DNA test to prove whether he is Prince Charles’ son or James Hewitt’s spawn, one man with whom Princess Diana had an affair. Prince Harry DNA can’t be that hard to come by – just ask around amongst the Las Vegas hookers – they surely can come up something.

According to The National Enquirer, Prince Charles freaked out in like a drunken telemarketer when he was informed of this ludicrous decision. He said, “Harry is my son and I refuse to allow his royal heritage to be put to the test!” Jeez, can someone take a damn chill pill?

A source says, “Prince Charles was so livid when he saw photos of his nude son partying with girls at a Las Vegas hotel – but that’s nothing compared to the anger and hurt he felt when his own mother and her royal advisers coldly demanded that he force Harry to agree to a DNA test that would prove, once and for all, whether Harry is truly his son.”

Allegedly the old Queen Elizabeth is so pissed off with her grandson’s antics over the past few years that she wants to check whether Harry is Charles’ son. After all, Prince William settled down with Duchess Kate Middleton without much hysterics and drama. Why is Harry then the proverbial black sheep in the dysfunctional family? There must be a reason to his insane behaviour, should there not be? Well, according to the source, “The Queen’s so humiliated she’s questioning again whether Harry’s her real grandson – or if the persistent rumours that he’s Diana’s child by Hewitt are true.”

It could be that these rumours are mere conspiracy theories, like the moon landing and JFK’s assassination, but it could also be that these sordid stories have some fact to them. What would this mean to the Windsors? Well, we think the Queen needs to check herself before she wrecks herself and stop pouncing on Prince Harry before he becomes the red headed step child that’s been part of pop culture ever since the dawn of Mick Hucknall.

Oh, and Charles, never put your baby in a corner.

Let us know in the comments below whether you think this story is bull or true.