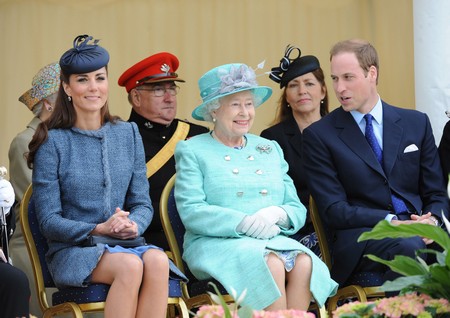 Kate Middleton has been severely ridiculed by Chinese officials as an entitled gold digger after the royal loot! A promotional video released online pokes fun at the royals including Prince William, Queen Elizabeth II, The Duchess of Cambridge, and their support for the current austerity campaign. The video picks on Kate with a special emphasis – ridiculing her for supposed avarice.  The Royals, portrayed by actors, are shown on their way to celebrate the Diamond Jubilee and trying to hail a taxi.

This outrage was filmed under the auspices of Chinese officials with the Chengdu Association for Cultural Exchange with Foreign Countries. Supposedly this video is part of an advertizing campaign showing off Chengdu’s world renowned breeding and research base for giant pandas – Chengdu paid for a fleet of 50 ­London black cabs to be painted with pictures of ­pandas – the video publicizes ‘panda cabs‘ but also takes a nasty slap at the royals and especially Kate.

While our source claims that the Chinese officials have called this lampoon ‘harmless fun‘ they also say ‘outraged Britons condemned it online.’  We can only imagine that the British Royal Family, British government, and British people do not appreciate being ridiculed by anybody, least of all by officials representing a brutal dictatorship like China.  Can you imagine a foreign entity in China making a promotional video that ridiculed the government there or any revered Chinese entity, say Mao for example?  Good luck!

The Express details some of the video: Lookalikes play Kate, Prince William and the Queen in the controversial film made by Chengdu city officials.

The royals are shown trying to take a taxi to the Diamond Jubilee celebrations after the Queen insists they save money. Kate lookalike Colette Mularkey screeches: “I just don’t understand why we cannot take the royal limo. I didn’t marry ­royalty to schlep around in a taxi.”

William lookalike Simon Watkinson protests: “But darling, granny is right. The commoners want to see us tightening our belts and all that.”

Hands on her hips, Kate complains: “Rubbish, people want to see that they can be like us if they just work hard”.

At this, the Queen’s lookalike Amanda Bellamy fixes her with a withering look and scoffs: “Like you did?”

William interjects: “Now, now granny, we all know that it was I who fell for Kate.”

Kate replies: “That’s right, I didn’t even fancy him at first. Don’t you remember? You had to practically beg me for my phone number.”

Let’s watch and see if this develops into anything major.  Kate Middleton a gold digger? She was a wealthy girl from a very comfortable family and the royals are lucky to have her.  The idea that she is spoiled and avaricious, as the video implies, is insulting.  If this were done as a comedic effort by entertainers and not by a government agency it would just fine – freedom of speech and all that – but from a foreign entity enjoying the hospitality of Britain – no way!

Tell us what you think.  Let us know in the comments below if you think it is cool for China to ridicule British Royalty.