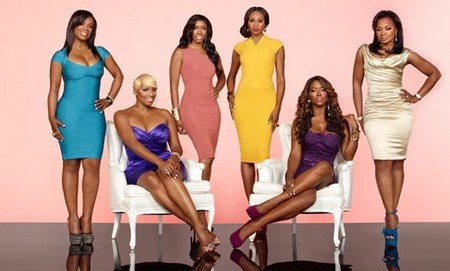 Oh my goodness fans of The Real Housewives of Atlanta, it’s finally going to happen! After years of avoiding each other, on tonight’s episode Kim Zolciak and NeNe Leakes will finally come face to face!  The ladies have been on much less than bad terms ever since an explosive interaction on a reunion show a few seasons ago. At the time Kim was dating (or being kept by) Big Poppa and NeNe seemed to be personally offended by the fact that Kim was so blatantly dating a married sugar daddy. NeNe ended up demanding that Kim “close your legs to married men” and from that point on these two were kept as far apart as possible.

Tonight we see a party being thrown in NeNe’s honor and Kim makes a quick appearance as a reluctant guest. She almost makes it out of the place without an altercation, almost. Just as NeNe is coming off an elevator Kim opens a door and the two women end up face to face and forced to have an awkward interaction of sorts. As Kim says, she has never wanted to get out of somewhere so fast in her life!

Also on the new episode we’ll get to learn a bit more about Kenya Moore, the newest addition to the cast. I’m not too sure about this chick and from what I saw of her last week, I’m already not a fan. She initially came across like a super bitch and I felt bad for anyone that was stuck interacting with her, but whatever. Kenya has been in an on/off relationship with some dude named Walter for the last two years and it has always been a long distance relationship- until now. Now they are both in Atlanta and it’s obvious that they don’t know each other all that well. Kenya decides to corner Walter while on camera of course and ask him what secrets he has hidden from her!  I think she is just aiming to stir up drama any chance she gets. We’ll have to tune in and see if I’ve pegged her right!