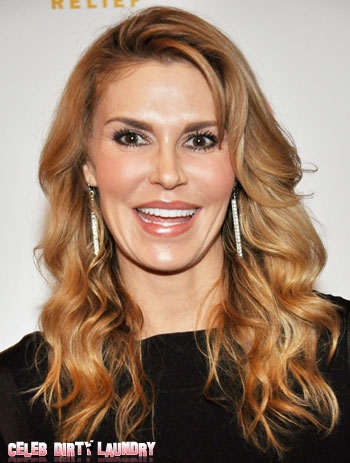 Real Housewives of Beverly Hills cast member Brandi Glanville proved this season that she wasn’t afraid to be brutally honest. Now, the 39-year-old mom and scorned ex-wife of Eddie Cibrian is proving that her extream honesty also applies to herself. In an interview in the latest issue of Shape magazine, the former model is dishing about what plastic surgery procedures she’s had done and why.

If you watched this season of RHBV then you know that Glanville spent most of her time braless and with as little clothes on as possible. Clearly the mom of two is in good shape—she attends Pilates three times a week. But Glanville says that living in Beverly Hills comes with a lot of pressure to be perfect. “Having grown up modeling, I’m very self-aware of my physical appearance. It’s hard to grow older, especially in this town where everyone is perfect! They’re all 20 years old and gorgeous and I’m now in same dating pool as them, yikes, it’s really hard! This town makes you insecure,” she says. So what has Glanville doing to stave off the aging process? “I’ll cop to a few plastic surgery procedures like Botox and fillers,” she admits.

Glanville takes the “less is more” philosophy to getting work done, she doesn’t seem to apply that to spray tanning. Glanville admits that she spray tans weekly and stays out of the sun as much as possible “I also have issues like adult acne and Melasma (patches of skin discoloration) since I’ve had my kids, so I try everything—lasers, photo facials—and I wear hats all the time to protect myself from sun.”

However, while the reality star admits to many small procedures, she hasn’t owned up to going under the knife for the serious stuff—yet. When RadarOnline claimed that she received a boob job from Brooke Burkes plastic surgeon husband, David Charvet, Glanville vehemently denied it on twitter. “@AmberGoodhand NO! Radar is wrong! I have had boobs botox filler that is it! They can have a dr inspect me!”

Botox boob filler??? I didn’t even know they could do that!