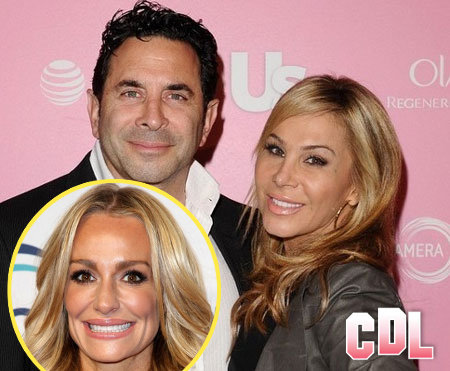 Taylor Armstrong, one of the faces of The Real Housewives of Beverly Hills, lost her estranged husband, Russell, last year when he killed himself. Taylor has now spoken up about the recent separation of her costar, Adrienne Maloof, from plastic surgeon Dr. Paul Nassif after 10 years together.

“I wish them both the best,” Taylor revealed to Wetpaint Entertainment about Adrienne and Paul. “I know what it’s like to go through this in the public. I definitely feel for them and I’m here for both of them if they need me.” That seems nice coming from a woman that never really seemed to care for Adrienne that much on the show. Maybe Taylor realizes they should put their differences aside and try to help someone going through the same thing she did nearly one year ago. Whatever the situation is regarding Taylor and Adrienne it’s always nice to hear someone say something nice about someone during a difficult time in one’s life and not make them feel worse.

Taylor’s statement comes shortly after Adrienne and Paul announced that they are willing to work on their marriage. Although Dr. Nassif did file for legal separation already, Mallof has said “it’s just another bump in the road.”

Hopefully it’s not that bumpy. When a lot of marriages don’t work someone will always fight or argue about something, regardless of how small and trivial it is. Now let’s put these two rich people against each other fighting for their houses, kids, nannies, namesake, whatever it may be I’m sure it won’t be pretty, even if its behind closed doors.

But who am I to say they won’t actually go through with it and give it the old college-try-to-work-it-out situation. Crazier things have happened. This is reality television though, and the track record for marriages lasting isn’t really all that good. What do you all think? Will the Adrienne Maloof and Paul Nassif divorce be a nasty one? Will they smooth things over in tim?