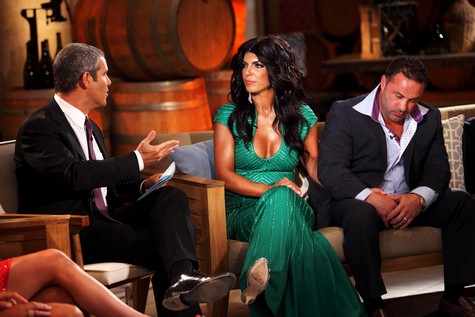 There is too much to discuss to contain in a single reunion special, so thank god Andy Cohen is hosting a three-part special with the cast of the Real Housewives of New Jersey to dish on all the crazy drama and cat fights that went down this season. I’m most excited to see how this starts and ends: Melissa Gorga yells to Teresa Giudice: “We all have to deal with your bullshit all season long. So you don’t get to sit here and play victim. Guess who’s the victim? I’m the victim! You called [me] a stripper!” Amazing! Someone finally said it! Teresa always has excuses but the gloves are coming off and I wouldn’t be surprised if the reunion turns into a big fighting cloud like on old cartoons!

In sneak peaks, we see Jacqueline Laurita accuse Teresa Giudice, “you had put something in your blog about my husband . . . you insinuated that my husband cheated on me two years ago . . . you’re pretty sick.” She keeps yelling and spills some major news: “Now that we’re being honest, he calls her those names all the time, and she calls him this and they punch each other. I’m just going to be honest now that we’re bringing it up . . . you guys get into some pretty bad—I’ve heard every name in the book.” We hope this isn’t true! We all saw what happened during the Real Housewives of Beverly Hills when cast members confronted Taylor Armstrong about the emotional and physical abuse she endured before his suicide last summer. If Teresa is in an abusive relationship she needs to get out!

Jacqueline also accuses Teresa of turning a blind eye to husband Joe Giudice’s many affairs. Teresa calmly responds, “Jacqueline, if my husband cheated on me, he would not be sitting on this couch.” Well we know that Joe isn’t all calm smiles. He is facing court over illegally obtaining a drivers license by using his brother’s documents! There are definitely skeletons in his closet that will be seeing the light of day soon! And what about the famous Caroline Manza fight? Well, this episode we will see Caroline yelling to Teresa, “You are going to wake up one morning and be alone . . . this is your family and look what they’re doing to you . . . I’m on the outside looking in and it’s so hurtful.”

The reunion special part two airs Sunday, October 7th at 10pm eastern. Will you be tuning in? Check back here for live coverage of the episode!