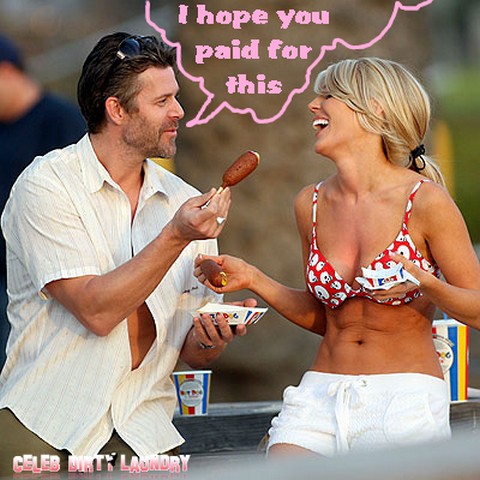 I like The Real Housewive’s of Orange County’s Gretchen Rossi, I really do. But she is proving to be either stupid in love or just not the brightest bulb period!  First she has spent at least three long years invested in a relationship with deadbeat, Slade Smiley and now she’s talking marriage and babies with this guy!  Gretchen has, on numerous occasions paid Slade’s child support for him. As RHOC viewer’s already know, he doesn’t seem to have a job, his business is Gretchen. He makes her phone calls, carries her purse, that kind of thing. When it comes to holding down a job and making some money, Slade leaves that to Gretchen and for the most part she seems just fine carrying his ass.

He did propose to her last season on the show and Gretchen wisely turned him down but now things are different, says she. Now she’s really like that ring (that she’ll inevitably buy for herself) and is ready to take matters into her own hands if necessary! She recently told OK Magazine,

“I might not [ask him to marry me], but I’m just saying you never know. I kind of have a wild hair up my ass. I’m just saying a guy doesn’t always have to do it. He can still do it, but maybe I might too. I don’t know, but if [he] doesn’t something soon, I might have to!”

In case you wondered, the couple is also trying to take steps toward having a baby. Slade first needs a vasectomy reversal though so there is a bit of time and one can hope that Gretchen will come to her senses before she ends up like Slade’s ex baby mama- alone and on the hook financially for everything. Oh wait, Gretchen already does pay for it all!

Should these two get married or do you think that Gretchen will eventually realize she’s being taken advantage of and run like heck? Tell us your thoughts in the comments below!