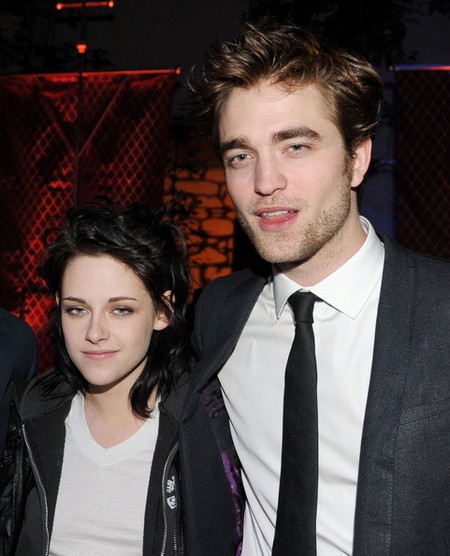 Is there trouble in the air for everyone’s favorite Twilight couple, Kristen Stewart and Rob Pattinson? Photos displaying the couple and their customary grim mugs developed last night as the couple left the Snow White and the Huntsman after party in London.

Stewart’s in London for the premier of her new dark fairy tale flick and Pattinson just celebrated his 26th birthday this past weekend with friends and family.

Relax Twi-hards. I’m pretty sure all is well in paradise. Stewart and Pattinson have both expressed their hatred of the paparazzi, so smiles for the cameras are few and far between. The couple has actually been mixing a lot of business with pleasure.

After several days of misinformation, E! News reports that Kristen was indeed by her man’s side to ring in his birthday extravaganza at Claridge’s along with friends, Tom Sturridge and pregnant fiancé, Sienna Miller over the weekend. E! New says Kristen left her Snow White junket in time to make it to Claridge’s early Sunday night and stayed until the party broke up by 1 a.m. Pattinson returned the favor at Kristen’s Snow White after party.  Hollywood Life reports the couple was especially affectionate inside. “Rob had his finger in Kristen’s jean pocket, they were giggling together and being cute #SWATH,” a fan tweeted.

It’s great the couple is finding time together in London especially since Rob is due in France next week for the Cannes Film Festival. He’ll be one of the bells of the ball since his highly anticipated thriller, Cosmopolis, is set to debut there. There’s no word on whether Kristen will follow him to Cannes. Snow White premiers will keep her pretty busy with upcoming stops in Madid, Mexico and Berlin. However, it wouldn’t be the first time the couple flew under the radar to be together.

Who would have thought this couple would have stayed together so long? I know, Twi-Hards, you did. Their relationship has lasted four movies and over three years. Filming just wrapped on the last Twilight installment and, if you’re like me, you’re wondering if the couple can make it even without the movies to force their time together. Some people are convinced that theirs is nothing but a showmance and the publicity stunt will end when the buzz for the Twilight franchise is over.

But from recent events, it looks like they have no problem hooking up in between their busy, in demand, schedules. I’m actually starting to believe this couple has what it takes to survive. I know, I know! You knew all along!