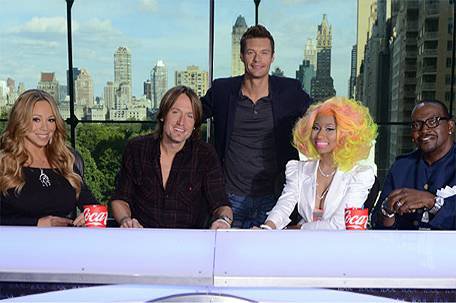 With Nicki Minaj, Mariah Carey, and Keith Urban in the new judges’ seats, it sounds as if things are going to be a total-epic-humongous disaster on this season of American Idol. Did someone say disaster and drama? Then we’ll definitely be tuning in. The hottest news surrounding the show right now isn’t all the wonderful singing hopefuls that have already started to audition around the country; the clash of the divas is of much more interest.

Apparently, Nicki Minaj and Mariah Carey are constantly clawing at each other’s throats with their fake acrylic nails — and Keith Urban, the remaining judge beside returning Randy Jackson, is tired of being thrown in the middle of things. Really, who can blame him? We wouldn’t want to play the role of peace-keeping moderator between those two divas.

Mike Walker writes in the print edition of The National Enquirer (October 29): Keith Urban suddenly bellowed at the show’s producers: ‘This trash isn’t what I signed up for!’

He’s publicly playing it cool, telling interviewers everything’s ideal on ‘Idol,’ but the Aussie country crooner’s crying the blues to execs and close pals — saying he wants to quit. ‘They don’t pay me enough to have to deal with this crap,’ kvetched Keith, who pockets a paltry $4 million a season, about half Minaj’s take — and chump change compared to Mariah’s whopping $18 million paycheck.

Insiders say Keith told execs: ‘I don’t want to be the peacemaker this entire season,’ and he’d be grateful if they’d replace him.

‘Keith knew there’d be friction between the two women, but had no idea how vicious and threatening it would become,’ says a source.

Source adds, ‘What make him uncomfortable is the level the animosity has escalated to — and where it could go from here. And his wife, Nicole Kidman, is concerned as well’

What do you make of all the American Idol Drama 2012/2013? We hate to say it’s enthralling and is getting us pumped up for the new season, but that’s the truth. Maybe the dueling personalities, and the third wheel, and the fourth wheel (Randy Jackson), will give the show the pizazz it sort of lacked last season. The judge dynamic last season was great; however, people like to see a bit of conflict and interaction that isn’t always JLo-smile-smile-cry “aw, baby, you know I love you.”

Are you looking forward to the Clash of the Divas and, furthermore, how Aussie Keith is going to temper these two flames? How long do you think it will be before he throws up his hands and walks out the door? Let us know in the comments section below what you think of the new American Idol judges.