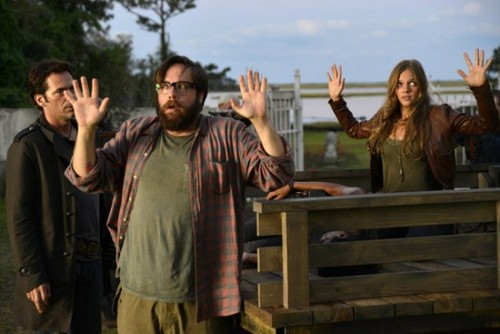 Tonight REVOLUTION returns to NBC with a whole new episode called “Sex and Drugs.”   Last episode, two weeks ago, Nora had a stab wound from trying to stop rebel Hutch from bombing the steam train. The bomb was averted, but that meant that Captain Neville got away with Danny on the runaway train. Nate threw Charlie off the train to save her from his Dad (Neville). Dad wasn’t pleased about that. Miles saved the train from the rebel bomb – against his instincts – he picked his nephew over the cause. Miles also dived off and joined up with Charlie.

Official synopsis of this week’s episode: In order to save Nora (Daniella Alonso) from her injury, Miles (Billy Burke) leads the gang on a detour to visit an old acquaintance of his for medical support, but they quickly find themselves in unfriendly territory. Aaron (Zak Orth) recalls his meek history as he looks back at his pre/post-blackout life, and Neville (Giancarlo Esposito) delivers Danny (Graham Rogers) to Monroe (David Lyons). Tracy Spiridakos, JD Pardo, Maria Howell, Tim Guinee and Elizabeth Mitchell also star.

This week on Episode 6, Nora needs medicine to save her life, but Dr. Vidal wants to charge a little more than your standard copay…  He wants to bed down with young Charlie and we see her in a party dress, all dolled up and looking ready to go Pretty Baby to save Nora. Will she go through with it? Will Miles allow it to happen?

With this show, you never know – they killed off major character Maggie out of the blue just two weeks ago. I appreciate a show that’s willing to sacrifice characters to keep the plot intriguing…

Tonight’s recap:  We open with Charlie and Aaron dragging a wounded Nora onto a wagon and Miles keeping the horses at full speed to trek the five hours to where they need to be. Nora must be badass – this is her second major injury and she’s still fighting.

Back in the time of electricity, on the night of the blackout, we see internet zillionaire Aaron and his hot young wife in a limo celebrating their anniversary. Then all goes dark… Then they’re plowed into by a speeding semi!

Back to the non-electric present, Neville brings Danny to Monroe who promises him the captain will be “taken care of” for killing his father. Monroe tells Danny he’s a guest and can have anything he wants – he offers food and women.

Neville apologizes to Monroe for killing Ben who gives him what he deserves – a promotion! He puts him in charge of intelligence and interrogations. Yeah! The psycho’s a major now – a major psycho!

Miles and crew pull the wagon up to some guy’s place – name of Drexel. Then suddenly they’re all at gunpoint and Miles asks for a doctor. His old buddy’s none too pleased to see him. He holds a gun to his head and counts to three. Of course on three, we go to the break… Damnable advertising and mid-show cliffhangers!

The gun clicks and Drexel says “You should see the look on his face.” OMG – he Lando Calrission’d Miles. He invites them in and offers rooms, wine and hot baths. Aaron wants them to stick together and Drexel’s offended. Miles takes off with Nora to see the doc and Drexel goes off with his harem to get jiggy.

Back in the electric past, Aaron’s helping his wife, who seems to be very sick. They’re beneath an overpass and a guy comes along. Stranger Sean comes upon them and asks if she drank from the lake – he tells them she’s likely got dysentery. He tells him “You’ve got to be more careful” because the sewage pumps went kaput and the water’s now bad.

Back in the now, Dr. Vidal wants to do a live transfusion, so he hooks Miles up to Nora. The two hold hands while his blood flows into her. Aww, so romantic!

Back upstairs, Charlie indulges in a hot bath in the big fancy bedroom they stashed her in. She has a flashback to her mom ditching them and telling her to protect Danny and how she failed him on the train. She bails on the bath and opens her Return of the Jedi lunchbox and tears up her postcard collection.

Nate reports to his dad and Monroe and they review the intelligence report from when Nate was held captive by the rebels. They show the photo of one of the necklaces to Nate and he says Aaron has it. Monroe says he’ll send Strausser out after them (obviously an assassin of some sort) who will bring back the necklace and Miles. Nate’s upset because the assassin doesn’t leave survivors.

Nora’s on bed rest and Dr. Vidal gives her 50/50. Miles said they’re going to load her on the wagon and get out of there. Miles tells Drexel he owes him one and he agrees. Drexel asks if they’ve told him how they know each other. He says Miles was firing squad happy. He reveals Miles killed off his drug-making competitors and he paid Miles in stacks of gold.

He says when Miles abandoned the militia, he was unfairly tainted by association. Drexel shows him his burned up poppy fields and said an Irish family up the road burned the crops because they have a “problem with heroin.” Miles agrees to take care of them, but says then they’re even.

Drexel said he doesn’t want Miles on the case, he wants Charlie. Ohhh. This is what they meant… Clever – the promos for this episode made it look like he wanted her for naughty shenanigans and so far, it appears that’s not the case!

Back from the break, Charlie’s in a sexy lace dress and Miles is telling her she doesn’t have to do it. She doesn’t see a way out. Aaron asks if she’s just going to kill “some random dude?” He tells her the Irish neighbors are innocent and what she’s contemplating is murder.

Drexel gives her a needle to shove into the guy’s eyeball and then punches her in the face to make it a convincing cover story that she’s one of Drexel’s girls that got away. Aaron’s distraught but Drexel backs him down.

Back in the past, Aaron and his wife are scrambling to get away from marauders. They grab his wife and beat Aaron up. Their friend Sean of the stagnant water saves them.

Charlie’s off down the road and Aaron is telling Miles he’s known Charlie since she was in pigtails. Drexel tosses him a bag of gold as payment and for funeral expenses for Charlie. Drexel reveals that once she kills the Irish dude, his family will off her.

Aaron tells him to leave him and Nora behind and go save Charlie. Miles says it’ll be hard for them to get away and Aaron says he’ll try and that he has an idea.

Charlie makes it down to the Irish place and asks for Bill O’Halloran. She says she’s got something good on Drexel. They search her.

Aaron calls the guard in and Miles kills him and takes off down the dumb waiter. He finds an armed guard in the kitchen and murders him before rushing out. BTWs, when Miles asks how Aaron knows where the dumbwaiter goes, he tells him he had three in his house.

Charlie’s brought to O’Halloran and sees him playing with his grandson. His wife whispers, “Do you think she knew Becca?” So that’s why they’re burning his drug crops… Charlie sees photos on the wall and sees they were cops. He sees her holding the hair pin and asks what she’s planning on doing with it. She says it’s just for her hair and lays it aside.

Charlie asks about Becca. O’Halloran says she ran away to Drexel’s because it seemed glamorous. He tells her that he dressed up pretty and got her hooked on drugs, but was “nice enough to send the body home.”

Back at Drexel’s, Aaron’s dragged outside. He says to take it out on him, but to let Nora go. Then Drexel’s men drag Nora out – still unconscious. Dr. Vidal shoots her up with pure adrenaline and she comes to in a panic.

Charlie sneaks up on O’Halloran with a letter opener, but he sees her and knocks her away.  She hits him with a pot and knocks him out. Charlie kneels and prepares to stab him. As she slashed out, Miles stops her hand and tells her they need to go.

Aaron and Nora say they won’t shoot each other. He tells them the person that shoots and kills the other gets to live or if they refuse to play, he’ll shoot them both.

Back in the past, Aaron’s struggling to start a fire with flint and steel. He lashes out at his wife when she offers to help. He tells her he used to figure out how to give her everything and now he can’t give her anything. He tells her he can’t hunt to feed her or fight to keep her safe. She says it doesn’t matter to her – that he’s all she needs.

Aaron and Nora face off. Drexel hides behind a bullet proof door and counts to three. He orders them to shoot, they don’t. Aaron tells Nora to shoot him and go help Miles get Danny. She begs him no, but he insists that she shoot him. She says no again. Aaron pulls the gun on her and then turns it on himself and shoots himself in the chest.