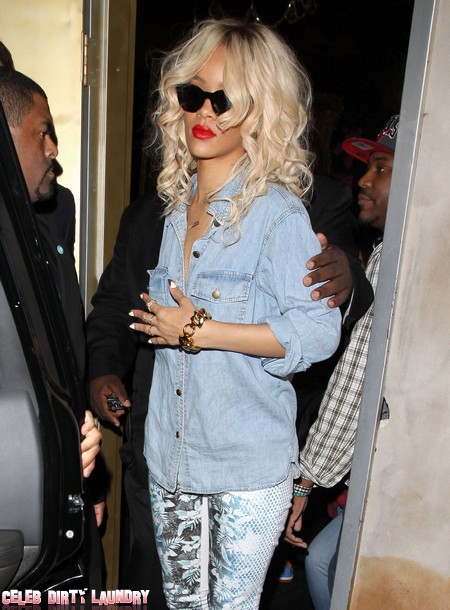 An inside source says that Simon Cowell has replaced Britney Spears with Rihanna as his top pick for ‘The X Factor USA’ judge.  Simon needs the hottest star possible to rescue his sinking show and Rihanna could do the job for him.

According to the inside source Britney is out of the running.  That is a good thing.  Britney is not the sharpest tool in the shed, to say the least, and having to perform live could send her BACK over the edge.  Let’s keep in mind that what Britney does best is lip synch and an X Factor judge requires an agile and clever mind – something Britney has never had.

Hollywood Life has the exclusive:  Could Rihanna find herself sitting pretty next to Simon Cowell this fall? An insider at The X Factor tells HollywoodLife.com exclusively that negotiations have started for the “Birthday Cake” singer to be added to the show’s illustrious panel — which is pretty vacant after Paula Abdul and Nicole Scherzinger were fired from the show.

Our source adds that discussions for Britney Spears to also join the panel are “pretty much dead.” But that’s OK — We need Britney to focus on making new music!

What do YOU think? Would Rihanna make a great addition to The X Factor panel?  Who would you rather see on the The X Factor USA, Brit or Ri Ri?  Let us know in the comments below.