Robert Pattinson and Kristen Stewart NOT Sleeping Together on Twilight Tour 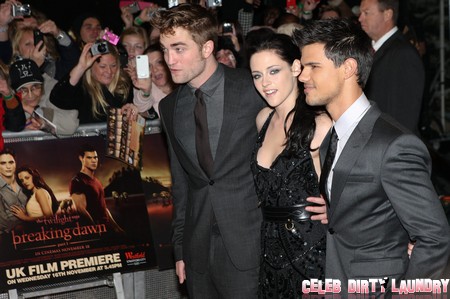 Are they or aren’t they back on?  I guess they like to keep us guessing but it seems like Summit Entertainment cannot take any chances on Robert Pattinson and Kristen Stewart for their worldwide media tour for the last installment of the Twilight series. The on again-off again couple are purposely booked for separate rooms and even separate hotels just in case any fights break out between the two stars.

An inside source even claims that, “Despite getting back together, Rob and Kristen will have separate hotel rooms booked for them on the upcoming promotional tour for Breaking Dawn-Part 2. Summit Entertainment isn’t taking any chances that the couple will have problems again and be forced to scramble at the last minute to book one of them a posh hotel suite.”

This is going to be a rough time for Rob, since he is embarrassed of the cheating scandal, and has no way out of this commitment for the Twilight premiere.  A source says, “Rob and Kristen are legally required to promote Breaking Dawn-Part 2 together along with the rest of the cast. Their individual contracts have very specific language about what is legally required of Rob and Kristen to do on the publicity tour.”

It seems like Kristen may not have problems with only Rob, but the rest of the cast, the source goes on to tell,  “In fact, in several cities, rooms have been booked for Kristen at a separate hotel from the rest of the A-list cast.”  KStew has to keep it together for the “Twihard” fan base which exists internationally.  Let’s see if she can do it….

The Twilight Saga: Breaking Dawn-Part 2, will be in theaters November 16