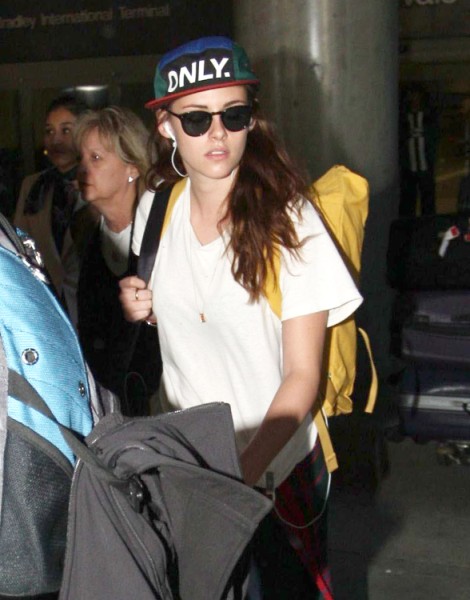 Kristen Stewart and Robert Pattinson are back! After going solo to promote their final Twilight flick, Breaking Dawn – Part 2, in Australia and Japan, the couple touched down in LAX yesterday within moments of each other.

According to photo agency, Fameflynet, Kristen landed “shortly after” Rob but there was no grand reconciliation for Twihards to swoon over. Looking disheveled and a bit surly, Rob hastily made his way out of the airport and into a car. After her 11-hour flight, Kristen looked a bit more relaxed, and followed Rob’s exit. She hopped in a black car and left the airport as quickly as possible (naturally, who would ever dawdle?) and there were no signs or news that Rob was waiting for her.

So what gives? The newly reconciled pair haven’t seen each other in just under a week and Rob can’t greet her at the airport?

To be fair, I wouldn’t wait for my spouse either! After a flight that long, the only thing I’d want to do is take a shower and a nap in my own bed. But could Kristen’s threesome comments have had anything to do with Rob’s bad-ittude? I doubt it. Kristen has been getting a lot of shit for the (obviously) unguarded and unrehearsed answer she gave a Japanese reporter about love triangles but Rob can’t jump down her throat about that. If anything, he could be annoyed that she refuses to stop falling for traps from journalists and continues to provide delightful quotes that make everything seem like she’s eluding to the Rupert Sanders’ affair. But that’s just Kristen Stewart. She’s too cool to think sometimes.

But fret not Twihards! Just because we didn’t see Rob and Kristen in a passionate embrace outside of LAX doesn’t mean we won’t see it soon enough. Next week the couple will officially be together for the first time since the cheating scandal as they perform promotional duties in LA. If we couldn’t judge their body language accurately now, we’ll definitely do it then!

If Robert Pattinson avoids Kristen Stewart at LAX then is it safe to say their behavior will be similar during the Breaking Dawn press junket? Will we get any photos of them posing together or will Taylor Lautner play the monkey in the middle the entire time?