Kristen Stewart Engagement Ring Being Designed, Will Wedding To Robert Pattinson Be Soon? 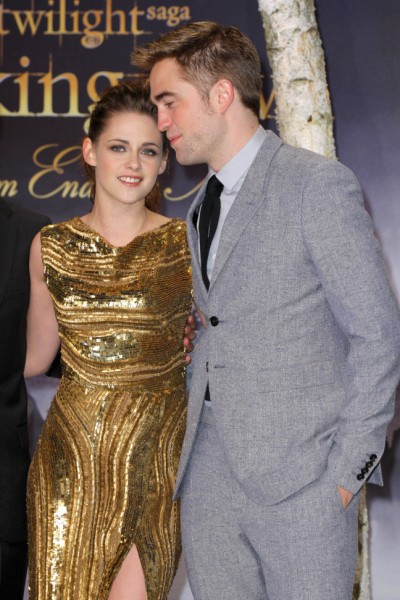 Horrific outfits outside, it’s been awhile since Kristen Stewart and Robert Pattinon’s love has made any news. Are you having withdrawals? I’m not gonna lie, it’s been pretty boring. How can you go from reading anything and everything about the couple through the last several months to absolutely nothing? Gossip is sad right now. We were spoiled by the amazing summer of Katie andTom and Kristen and Rupert!

But OK! magazine must feel our pain because this week the tabloid has a story involving an engagement ring. Kristen Stewart is apparently dropping the hints to Robert Pattinson and he’s been a busy little elf designing the perfect band that says “I really wanted something bigger but my husband didn’t want me to look like a Real Housewife of Orange County.”

“Kristen is not the type to wear anything too fancy. But Rob wants something that makes a statement, which means he’s got his work cut out finding something that will be original and impressive that she will wear!” a source told the mag, adding the design has rubies and black diamonds set in the band. “The idea for black diamonds came to him when he was writing a song for Kristen. They are much more rare than regular diamonds, so Rob’s really drawn to the symbolism of that because they both feel like their relationship is extremely rare.”

I know so many of you haters are out there saying, “How appropriate! Black diamonds to match her black heart!” But I like the idea and totally don’t care that this story is 99% fabricated. I need my Kristen/Rob fix and you do too. Don’t lie! Although, I prefer the “Rob tells Kristen to take a shower” stories more than the lovey dovey ones – a lot more creativity goes into those!

Do you think this story is far-fetched or is an engagement ring and a wedding to Robert Pattinson in the works?