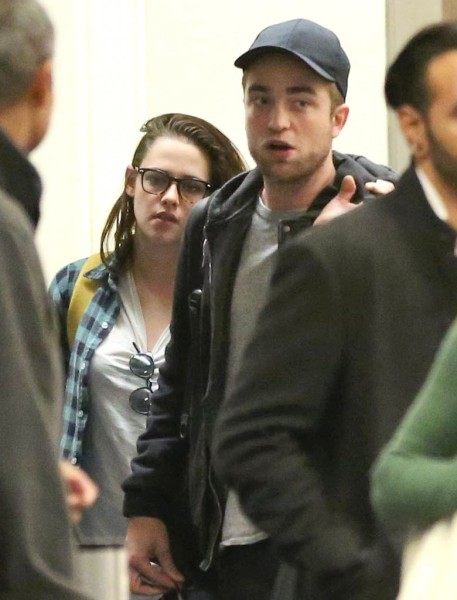 The road to reconciliation is always paved with a few bumps and some disapproving family members. Kristen Stewart apparently suffered so much through Robert Pattinson’s family’s Thanksgiving dinner that he’s decided to leave her behind when he goes back for Christmas.

“The family were smiling at Kristen and looking totally at ease on the red carpet, [during the Twilight: Breaking Dawn – Part 2 premiere] but back at the family home over the following weekend things were more difficult,” an insider told Heat magazine. “They had a meal on Thanksgiving and it was nerve-wracking for Kristen. She felt very uncomfortable and Rob’s sisters couldn’t be completely welcoming. It won’t go back to normal straight away, even if Rob has decided to try again. Rob’s mum wanted him to spend Christmas with them in London and, before their trip to the UK, that had been his and Kristen’s Plan. From London, they were going to fly to Mexico for New Year but that’s all changed now. Rob’s family made it clear that they really want to see him over Christmas and, after the intense promotional tour for Twilight, Rob liked the idea of spending time alone with his family.”

This seems to go along with the new favored rumor that Rob’s messing around with Kristen and refusing to totally commit. She’s supposedly getting more and more frustrated by all the hoops he’s making her jump through. I didn’t believe those stories and I really don’t get this one either. Usually couples split up holidays – his family for Thanksgiving, hers for Christmas. Kristen Stewart’s family is going through some separation stuff right now so maybe she decided to stay home with her brother. Who knows?

What we can be sure of is that it probably was pretty awkward during that Thanksgiving dinner. How could it not be? This chick embarrassed the hell out of their son and brother. There’s got to be some residual hate and disappointment there. I’m not saying they haven’t forgiven her. Rob seems to have had so they know to get on board. But they probably haven’t forgotten yet. I would have stayed away for Christmas too. One family gathering is enough for that couple at the moment.

Is Robert Pattinon leaving Kristen behind a good idea considering what’s happened or should he encourage his family to get over it and spend more time with her?