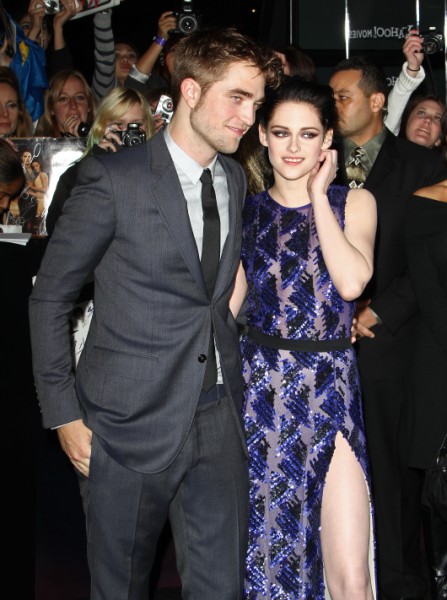 Apparently Kristen Stewart and Robert Pattinson are in such a magical place right now it’s almost as if the Rupert Sanders dry-humping was a gift to their stuck in the mud three-year-relationship. Kristen made that corny, special video montage and managed to save their love! But just wait Twihards! Rob still has trust issues and he isn’t above messing with Kristen’s head and insecurities as payback for everything she put him through. What? Not Rob, you say? It seems sparkly vampires can still go for the jugular even if they are vegetarians.

Rob signed on to co-star with fellow Brit, Carey Mulligan, in the upcoming Hold On To Me. Rob and Carey will play lovers who attempt to kidnap and random the town’s richest man. No big deal, right? Wrong! According to the National Enquirer, Kristen is uber jealous of Carey and her amazing career and doesn’t want Rob anywhere near her married self with all her talent and professionalism which is precisely why Rob is doing it I guess. “Rob just told Kristen he’s signed for a flick with hot Brit actress Carey Mulligan, knowing it would trigger a jealous streak generated by Rob’s constant raves about Carey back when she was dating one of his pals,” the mag reported.

Oh sure, Rob jumping at the chance to act with Carey had nothing to do with the fact that she’s one of the best and hottest actors of her generation and has worked with Ryan Gosling, Leonardo DiCaprio and Michael Fassbender in her last few films. God forbid, Rob and Kristen make smart decisions NOT based on emotion and pure stupidity.

I think the interesting thing about this (probably completed fabricated) story is that it encourages the Kristen Stewart/jealous/competitive idea. Rob can’t ever be in a movie with someone other than Kristen without her going into full-on bitch mode and she apparently hates every girl in Hollywood who competes with her for roles. The media tried to get her to hate Jennifer Lawrence for awhile but that never took off because no one could believe Jennifer hated anybody. Then we heard Kristen hated Emilie de Ravin and Katy Perry for daring to talk to Rob but we just recently saw Kristen hanging out with Katy at a Halloween bash with Rob nowhere in sight. I’m not saying there aren’t some simmering feuds going on within the 20-something Hollywood crowd. I’m just saying Carey Mulligan and Kristen Stewart are probably not one of them. How could anyone hate Carey Mulligan? She’s too damned cute and innocent. And seriously, she dated Shia LaBeouf – let’s let her be married and have some peace for awhile.

Is Kristen Stewart jealous of Carey Mulligan, you think? Would Robert Pattinson use another actress to piss Kristen off? I could see him rubbing Kristen’s nose in it a little bit because there probably is a little sense of competition with Carey. Carey’s been the go-to girl lately for the best directors and it probably drives Kristen crazy that she’s lost out on some roles to her but I can’t see Rob holding this over Kristen’s head for long. If he loves her and he’s back with her, why drive her crazy?