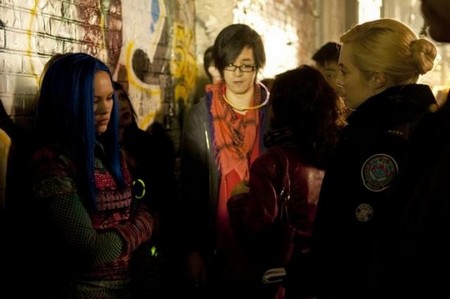 Tonight on ABC is an all new episode of Rookie Blue titled ‘Coming Home.’ On tonight’s when Izzy disappears, the officers move into emergency mode to track her down. If you missed the last show called “Messy House”, we have a full and detailed recap here for you.

On last week’s show Andy’s personal life turned upside-down when she answered a domestic disturbance call and the social worker on the scene turned out to be her long estranged mother, Claire, who abandoned her and her father 15 years ago.  Andy had to deal with her private issues as she worked alongside her mother to investigate the secrets of a family in turmoil.

On tonight’s show a noise complaint at an illegal warehouse party leads Andy and Swarek to an injured John Doe, a homeless squatter who has been brutally stabbed. They apprehend a surprising material witness — Oliver Shaw’s 15-year-old daughter, Izzy.

When Izzy disappears, the officers move into emergency mode to track her down. But her involvement in the crime nearly pushes Shaw over the edge – both as a cop and a father.

Tonight’s recap: Tonight’s episode begins with Andy and Sam at home getting ready for her housewarming party. The fact that she has been living there 6 months is irrelevant. There’s a knock on the door and its Andy’s mother, Clare who has only been back in her life for a month. Andy declines’ her mothers offer to help with the party until she offers her home movies of Andy as a child that were transferred to DVD for her. At that point she decides Clare can help with party food after all.

Andy and Swarek answer a call to a warehouse party. Once on scene they discover a stabbed squatter. As they are trying to gather information a blue haired teen kicks Gail and runs off. The teen ends up being Izzy Shaw, Oliver’s daughter. Shaw decides to play hardball and demands his daughter be taken into custody for assaulting a police officer.

Sam decides to do a background check on Andy’s mom which just pisses her off. She refers to his investigation as an “Epic fail.”

Izzy has been taken to the station where Andy tries to bond with her.  She tells her about how her dad was a cop too but she doesn’t get anywhere with her. Izzy’s best friend Amber has a bloody sweatshirt which has everyone thinking she knows an awful lot about the stabbing.  The squatter is named Adam and fully conscious.  He tells officers that he was stabbed trying to break up a fight between a guy- and a girl with blue hair.  In other words, Izzy knows a lot more than she’s letting on.

Shaw goes to his wives to get his daughter only to find Izzy missing.  Traci decides to get the truth out of Amber in an interrogation room.  They believe she knows where Izzy is hiding.  Amber spills and says that the bag she is carrying is Izzy’s and that Izzy was fighting with DK, a dealer.

Shaw decides to go and pay TK a visit on his own.  He finds Izzy a mess in the apartment and Shaw freaks out.  He takes TK into a bedroom and locks the door.  They bust the door down and find TK on the ground with Shaw holding a gun on him.  Izzy pleads with him not to fire his weapon.  He eventually puts it down and hugs his daughter.

Shaw and Izzy share a moment in the car where he apologizes for not being around enough.  He promises to be more active in her life.