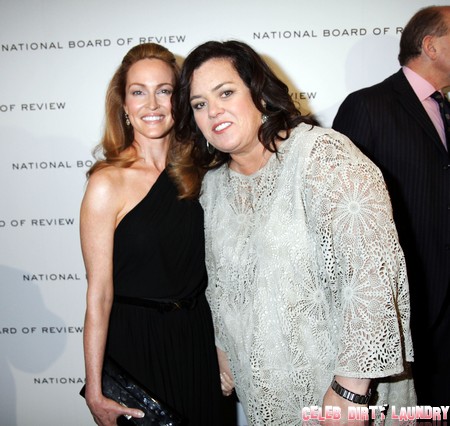 With the news of Rosie O’Donnell’s recent private marriage to Michelle Rounds hitting the net, details of their eight months of pre-nup negotiations are also surfacing.  Before the couple’s June wedding (which was kept very, very under wraps from the prying eyes of the public) the two were in heavy negotiations to finalize a pre-nup agreement that suited both their interests.

According to sources, O’Donnell, 50, was extremely tough (having already been through a messy divorce), with the paperwork being finalized just hours before they said, “I do”.  Wow, let’s talk about romantic!

While the comedienne was said to be very generous with her new wife, Rounds will get nothing if she cheats.  Does this go both ways Rosie? Oh wait; you’re the breadwinner of the family so I guess it doesn’t matter.

I guess Rosie is covering all her basis, which doesn’t seem totally out of the norm when looking at celebrity marriages.

The two were engaged last December, and were planning to marry in August, but due to Michelle’s health issues with rare desmoids tumors, the two wanted to cement their love sooner.  Michelle isn’t the only one dealing with her health; Rosie recently revealed that she had a mild heart attack not to long ago.

I guess there’s nothing like certain health/life scares that make things more of a priority. I say good on them for not waiting – and hopefully neither lassies will find themselves having any wandering eyes in the near future!