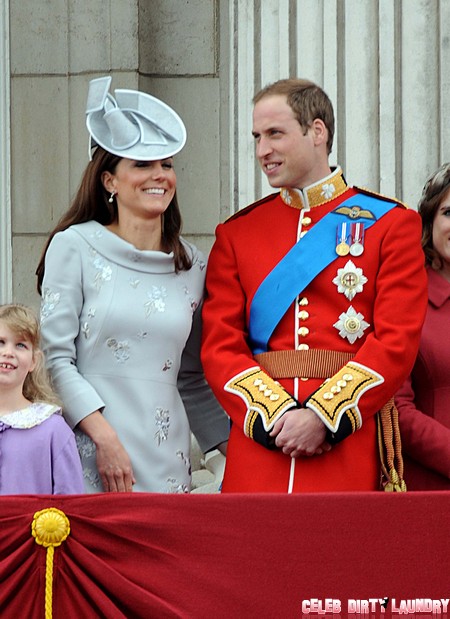 Last night, we reported the shocking news that, after years of waiting, Kate Middleton is finally a part of a legitimate scandal.  Closer Magazine published topless photos of the future Queen, luckiest woman in the world, wife of Prince William, Duke of Cambridge. The photos were taken while Wills and Kate took a holiday in France, and show the couple sunbathing on a terrace—but Kate hasn’t got a top on! Those teeny triangles of string bikini make all the difference between “harmless vacation” and “royal scandal!”

The world was thrilled, mostly because Kate and Wills are so private, that this is not only a naked photo, but a rare glimpse into their private life. Perhaps we’ll be able to zoom in and confirm a baby bump? In either case, the photos are not sexually charged like sister Pippa Middleton’s half-stripped party photos, or brother James Middleton’s sexy French maid outfit!

But, quelle surprise, the Palace isn’t going to take this sitting down. Their legal team is preparing to sue the media gurus responsible for the photos. Britain has much stricter paparazzi laws than the United States, and even if they didn’t, you don’t mess with Queen Elizabeth! A source reported, “These photos are clearly a blatant invasion of privacy . . . they are obviously taken with a very long lens and capture Kate and her husband relaxing, on private property, where they had every expectation of complete privacy.” Of course, if they knew they were all alone, wouldn’t you expect some topless royal lip lock pictures?

The source continued, “This is not the same scenario as Prince Harry who basically set himself up for the fall. Kate has done nothing wrong and it is disgusting that a magazine, which is published in a country with some of the strictest privacy laws in the world, is allowed to go ahead and publish this rubbish.”

In France, once a photo is taken, the person in it must sign and allow it to be published, much in the same way people in the US must sign waivers for TV appearances, otherwise their heads or blurred out. It is most likely that a lawsuit would end with a published apology and a huge fine, but probably nothing more. What more can you get today?  They aren’t going to lock someone up over a nude breast, are they?

A spokesman for the Prince of Wales office said the Duke and Duchess “have been hugely saddened to learn that a French publication and a photographer have invaded their privacy in such a grotesque and totally unjustifiable manner. The incident is reminiscent of the worst excesses of the press and paparazzi during the life of Diana, Princess of Wales, and all the more upsetting to the Duke and Duchess for being so.”

Let’s not forget that the paparazzi in France are held to blame for the death of Princess Diana by many. What do you think of the photos? Who is to blame? The paps, or the Duke and Duchess?