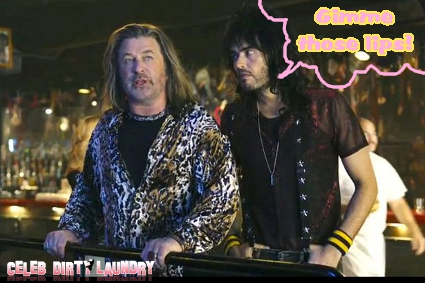 There was a little bit of a love-fest happening on the set of the film Rock of Ages.  Okay so maybe it was in character while filming, but still — smooches were had between co-stars Russell Brand and Alec Baldwin on the set of the upcoming film.

Russell, 36, had nothing but amazing things to say about his co-star Alec, 54 — joking about locking lips with the famous Baldwin.

He talked to reporters about the smooch, going as far as saying,“It is right on the mouth. It is sexy because Alec is a sexy man.”

Oh really, Russell?  Katy who!  All jokes aside, after watching the movie trailer, I have to admit I was somewhat surprised by how good it actually looks.  I was on the fence about casting — for some reason I just couldn’t picture the likes of Tom Cruise as a singing music legend.  Alas, I could be wrong, because with an awesome cast the few scenes I saw look really, really good.

Brand, who didn’t share a kiss with Tom, had this to say of his co-star:

“You’d think if someone were the biggest movie star in the world, they wouldn’t be so interested in other people, but he’s very interested and caring, he really cares about what he does. He’s a serious guy but very sweet. He’s a joy to be around.”

Well there you have it, once again it’s confirmed: Tom Cruise is a nice guy, and Russell Brand is quite the funny man — and oh yes, he fancies Alec Baldwin.

Image Credit to: Rock of Ages / altered by CDL