Sacha Baron Cohen To Ryan Seacrest: Sorry, I Meant To Throw The Ashes On Clooney! 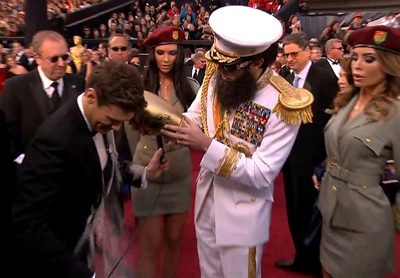 Remember that moment at this year’s Academy Awards when actor Sacha Baron Cohen, dressed as his character from the upcoming movie, The Dictator, spilled an urn of “ashes” (which turned out to be pancake mix) all over Ryan Seacrest on the red carpet?

Well, it turns out that while it was great press for his new film, Sacha wanted to make sure that Ryan knew he didn’t mean anything personal by it! According to E!, the 40-year-old comedic actor apologized to the American Idol host while backstage at last week’s taping of SNL and even let it spill that he originally had another target in mind! Related: Photographer Drops Attack Charges On Sacha Baron Cohen

“I saw Isla Fisher [backstage at SNL] and I said hi, and she said these words, and then it dawned on me. She said, ‘I apologize for my husband.’ And I said, ‘Oh, yes, yes, gotcha, thank you, thank you very much for saying that’…I didn’t realize her husband, The Dictator, Sacha Baron Cohen, was doing a walk-on cameo.

“He comes off stage, comes over to me, breaks character and says sorry about the Oscars, it wasn’t personal…Then he started telling me how it went down…Originally he said that they were going to spill whatever it was in that urn on George Clooney. Someone decided that wasn’t a great idea because he was up for a lot of nominations, it was a big night that night. Then they somehow spun the wheel of tragedy and landed on my name.“

According to Ryan, Sacha was “very very apologetic and genuine and kind and sweet,” which just goes to show that it was all a big prank and not an attempt to besmirch Ryan’s reputation.

It’s a good thing that Ryan had such a sense of humor about it. We’re thinking that George Clooney might not have been as generous about having his tux ruined.