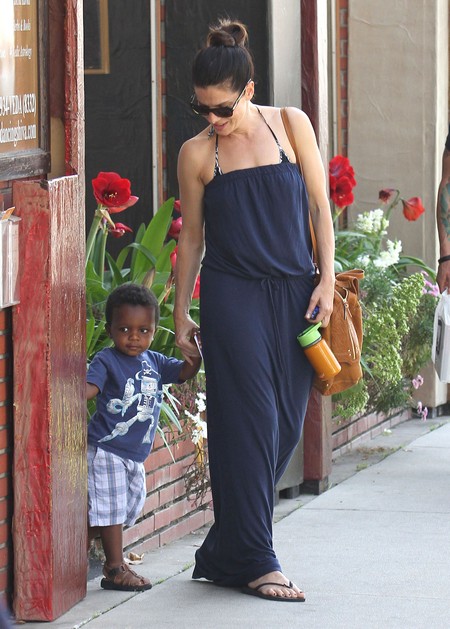 Sandra Bullock was in tears as she suffered a bitter and jealous tantrum over losing yet another man, this time it was Matthew McConaughey. Sandra and Matthew dated from the mid-to-late 90’s and allegedly got together for a fling in 2003. A source claims that “Sandra and Matthew ‘got’ each other from day one. They were soul mates.” And the source added: “Even after she married Jesse James, and Matthew moved on to Camilla, Sandra still carried a torch for him.”

Poor Sandra is better at winning Oscars than at winning men, or so it seems.  There was ex-husband Jesse James who was a serial cheater throughout his marriage to Sandy – and he seemed to prefer the skankiest women he could find over her.  Then Ryan Reynolds and Keanu Reeves both seemed to like her as ‘a friend’ but nothing more.  There were rumors, which we reported at CDL, of a secret romance between Sandra and Ryan but obviously that didn’t work out.

According to The National Enquirer Plus: Sandra Bullock was in tears when her “soulmate” Mathew McConaughey walked down the aisle with his baby mama Camilla Alves say sources.

Sandra Matthew dated for two years after meeting on the Mississippi set of the thriller a time to kill and 1995. The romance cooled, but they enjoyed a rendezvous at an Austin nightclub in May 2003.

“At one point, Sandra straddled Mats leg while she gyrated,” an eyewitness told the National Enquirer

“Another time, Matt bent her backward and kissed her neck. There was so much sexual tension in the air that after a while you just want to tell them, ‘hey, get a room!’”

The source adds: “They’ve always been best friends, and years ago Sandra and Matthew promised each other that if they weren’t happily married by their mid-40s they settled down together.”

“Now Sandra is raising her adopted son Louis alone, while Matthew has fathered two adorable kids in a blissful relationship with Camilla,” says the source.

“Continuing to live near Matthew was just too much for Sandra, especially after he moved back to Texas permanently,” says the source.

“For Sandra, Matthew will always be the man who got away.”

Let’s face it, Sandra and men just don’t work.  We don’t know why Sandra struggles so in the romance department but we bet her ex-lovers do!  So far none of them except Jesse are talking and we don’t really care what he has to say, do we?  What do you think?  What’s wrong with Sandra? Is it her or is it the men she winds up with? Let us know in the comments below.