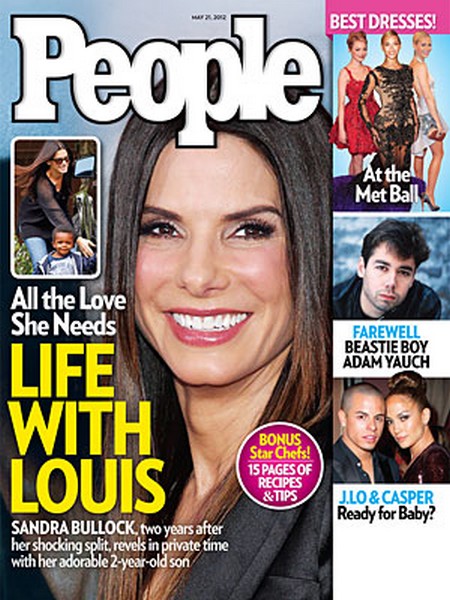 The current issue of People Magazine features the cover story ‘Sandra’s Life With Louis.’ Two years after Sandra Bullock‘s shocking split from cheating husband Jesse James, she reveals in private time with her adorable 2-year-old son, her life as a Mom.  The news of Sandra’s husband Jesse’s rampant infidelity broke just days after Sandra  won Best Actress for The Blind Side and gushed about James in her acceptance speech.   Many speculated at the time that Sandra would not recover from the betrayal.  But, her son Louis has become all the love she needs and she has her life back on track.

People has more: “Being a mom is her total focus now.  Along with her work, Louis has become her whole life.  Currently renovating a $16 million Beverly Hills mansion, the Oscar winner, 47, regularly shuttles between work at her Fortis Films production office and her son’s preschool.   She is raising Louis as a single mom, and she never thought it would be this way,” says another Bullock source. “She’s still trying to figure out [her new life].”

It certainly looks like Sandra’s life is back on track and better than ever since her divorce from Jesse, good for Sandra!  Also included in this week’s issue they have all the info on how Jennifer Lopez and her new boyfriend boytoy Casper Smart are ready for a baby.  She’s happier than ever with new love Casper Smart, which may be why Jennifer Lopez is open to the possibility of having more children.

To find out more about Sandra and Louis and a whole lot more, pick up the current issue of People, on stands Friday!