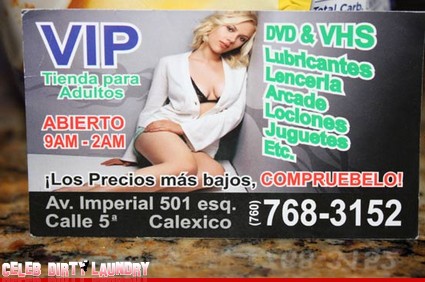 TMZ asked the store manager about the cards and that famous face promoting his products and he replied ‘What does it have to do with the business card? I don’t know who Scarlett Johansson is.’ So how did she end up on their ads? ‘The owner ordered cards from a company and said we need something with a girl on the card and the company did it.’  You can bet those business cards will become collector’s items very soon. There’ll be destroyed quick smart when the actress finds out what’s she’s been linked to.

Only last month Kim Kardashian threatened to sue a Mexican doctor who used her image on a billboard to promote cosmetic surgery. The ad showed the reality TV star relaxing on a sunbed. When the Doctor was asked if the endorsement from Kim was legit he replied ‘Obviously I did not speak to Kim Kardashian. I do not have her number‘. Somehow I don’t think that’s a valid excuse.