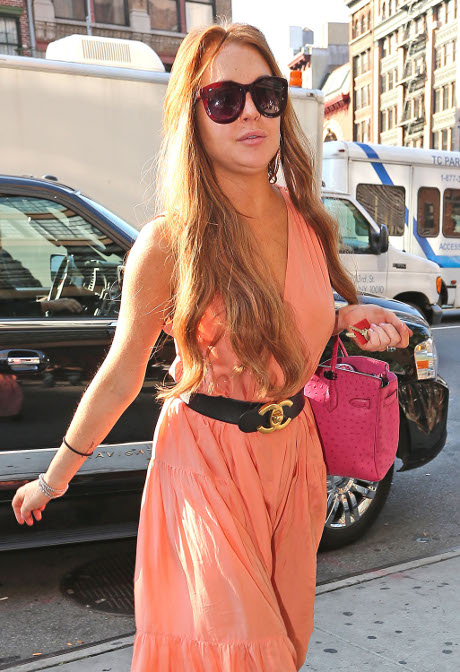 Recently, Lindsay Lohan allegedly ran into a man while trying to pull her car into the parking garage of the super posh Dream Hotel in NYC. The man claims that Lindsay struck his knee after wreckless I-don’t-care-whose-bones-I-smack-with-my-Porsche driving, and he also claims that Lindsay was heavily intoxicated and didn’t care what was happening around her. Police recently released security footage from that night and, after watching the video with some engaged eyes, it’s really quite hard to see exactly what went down. Actually, it’s hard to prove anything with this footage. So, therefore, I immediately side with Lindsay.

If you watch the video, which was obtained by TMZ, you can see LiLo’s black Porsche Cayenne making an entrance into the parking garage. I have to commend my fave celeb because she appears to be approaching the entrance with great care. Just imagine what this footage would be like if I-can’t-drive-worth-a-damn Amanda Bynes was behind that wheel. There wouldn’t have been a pedestrian left standing! So, I think we should commend LiLo for her impeccable and — from what I can tell — extremely safe driving. From the footage, she doesn’t appear drunk, despite what the alleged victim asserts.

Anyway, while the video is hard to fully piece apart, if you look closely you can see that there is in fact a man in front of Lindsay’s car as she pulls into the garage. The man, as stated before, claims that she hit his knee. That is virtually impossible to tell based on this video footage alone; however, after LiLo is inside the garage, the man bolts into the garage after her.

Now, we’re not saying that she did or didn’t hit the dude, but for a man who says he allegedly sustained traumatic injuries, he sure gets down into that garage quickly! But, it was probably just all that confusing adrenaline, right? Later, Lindsay was arrested for fleeing the scene of the crime. *meh* I don’t care what you do, Lindsay (but, honestly, stop fleeing crime scenes, please). I am ginger. We are ginger. I will be on your side 4 evah.

What do you think about these latest claims against LiLo? Did Lindsay Lohan crash into that guy? Watch the video by clicking here and let us know what you think!