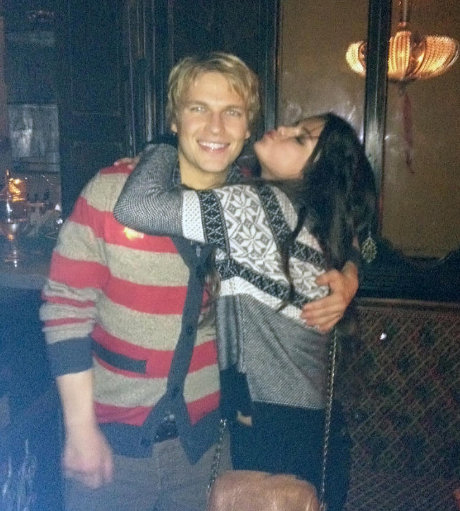 In the ongoing battle of who-can-make-the-other-most-jealous, Selena Gomez snapped a photograph of her and another guy, Ronan Farrow, that is sure to make Justin Bieber cringe a bit. Well, hey, if he can pose with random Victoria’s Secret models then Selena Gomez can pose with a twenty-four year old genius human rights lawyer at a non-descript holiday party, right? I think that’s fair.

The picture was taken in the early, early hours of Monday morning and posted on Ronan Farrow’s Twitter account. It appears to be at a party and, judging from the attire — and SelGo’s pretty fabulous Holiday sweater — we think it may be a Christmas party of some sort. Regardless of the occasion, the party seemed to be a hot one and Selena was wrapped around Ronan’s neck like a piece of super sparkly tinsel with puckered lips. She wanted herself some holiday sweetness.

The picture, posted above, is a bit awkward. Ronan stares straight at the camera while Selena, with kissy lips, oggles at his cheek. Selena might’ve consumed a bit too much tipsy juice.

Along with the Twit pic, Ronan tweeted, “Do not challenge the lovely @selenagomez to a dance-off. You will lose.” I mean, yeah, you’d definitely lose, dude, primarily because they don’t teach hip hop at Yale Law School. And, you know what? Nobody blames you for it. Just let her win, and then maybe you can score a date out of it! Hey, that doesn’t sound too shabby, does it?

Honestly, I’m not looking to see Selena re-establish her committed relationship with The Beebz. I think that situation was good for while it lasted but, ultimately, they were just two young pop stars blinded by each other’s fame. Maybe Ronan and SelGo would be a good fit for each other . . . . That is if SelGo is actually looking for someone else. How many of you out there think this pic is just a romantic trick to get Bieber’s attention? It might be, but I think SelGo is ready to test out different waters. Your thoughts on Justin Bieber and Selena Gomez?

In case you’re wondering about Ronan Farrow’s celebrity status, he is the biological son of borderline crazy director Woody Allen and a very prominent human rights activist/lawyer/writer/etc. Sounds like he’s sort of a genius of sorts. In other words, a complete flip from The Beebz.