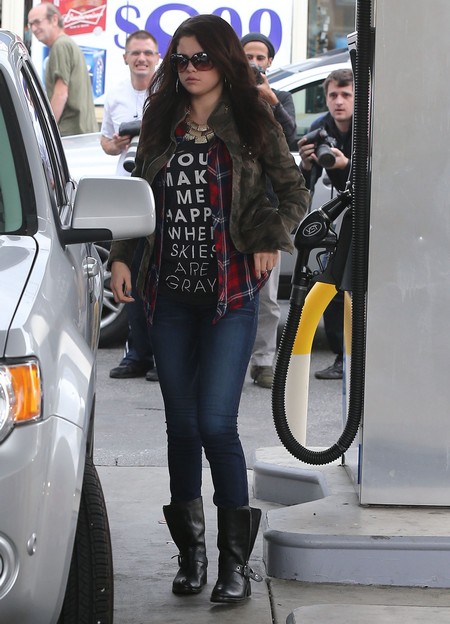 Selena Gomez and Taylor Swift were spotted leaving Osteria La Buca in Hollywood, California on the 17th of November. These two BFF’s were allegedly out and about for a meal and a salacious gossip session. They needed time to blow off steam, especially after Gomez’s troubling week with Justin Bieber and Taylor Swift’s recent breakup with that Kennedy kid. There’s no official information on what the two discussed during their goss session, but many media outlets have already pointed out the glaringly obvious theme of the conversation – Gomez’s Bieber break and Swift’s One Direction manhunt. Three’s a company, so the Bieber was not invited to join the girls on Saturday night; he rather spent his weekend rehearsing for the upcoming American Music Awards, a much needed reprieve from the troubling toils of teenage romance.

We all know full well that Swift is a black widow in disguise – she dates a man on Saturday, repents on Sunday, and writes a new song on Monday. There are new rumours doing the rounds in the entertainment media circuit that Swift is, in fact, once again linked to another man. This time, however, it’s not American Royalty, or a Hollywood film star, it’s the British Invasion. Yes, dear One Directioners, Swift is out to carve neat little “TS + HS = LOVE” signs on her desk, as she is currently romantically linked to Harry Styles, the innocent looking boy from the mega popular boy band One Direction. Lock up your children America, because Taylor Swift is out to get them quicker than the Grim Reaper on a quota binge.

On the other manicured foot, we have Selena Gomez, the beautiful and heartbroken Bieber believer. The first weekend after the initial break, and eventual reconciliation, must have been like lemonade on a hot day for Gomez, because she’s back with her straying beau and she doesn’t need to quell any scandalous cheating rumours.  Well, they’re not exactly eating the forbidden apple in their naïve paradise, but they are well on their way to turn a new leaf and whatnot.

These two must have had a bitchin’ gossip session, both literally and figuratively. They are at the pinnacle of their droll careers, but for some mindless reason, the sisters with the misters are intent on living it up with a man after midnight. We can’t wait for Gomez’s upcoming album – we have a sneaky suspicion her first single will be titled “Belieb In Love”, or something along those heartbroken lines. Her BFF Swift is, after all, a master at penning post-breakup songs, so Swift’s advice to Gomez must have been to write a song about the Bieber fever of the past week.